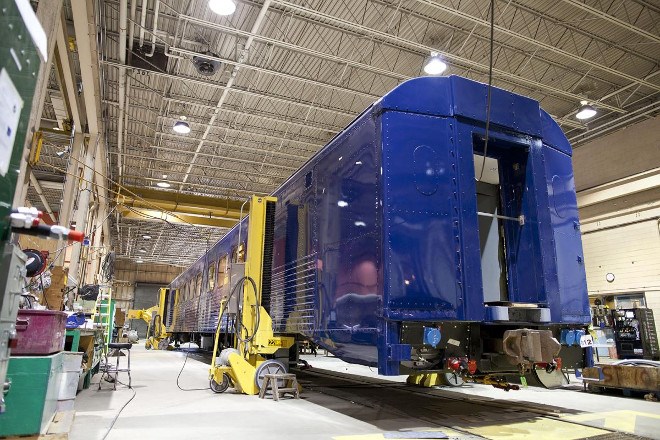 Andy Mitchell, president of Unifor Local 103 at Ontario Northland, was responding to a recently revealed partnership between Ontario Northland and Metrolinx to prepare a business case on the return of the train, cancelled by the McGuinty government in 2012.

The 38-year ONTC employee thinks this new arrangement is a good fit, based on Ontario Northland’s experience in rural rail and Metrolinx’s expertise in planning multi-billion-dollar urban transit projects.

“There’s a good combination and a good mix between both parties that we could develop into a great plan.”

Metrolinx is a sister Crown agency that oversees public transportation planning in the Golden Horseshoe Area.

Mitchell said he was informed of the Metrolinx arrangement in a meeting with ONTC president-CEO Corina Moore a few weeks ago.

Ontario Northland told Northern Ontario Business it’s been collaborating with Metrolinx on a business case to study the potential equipment and infrastructure requirements, as well as the costings surrounding a restoration of service. Their case goes to the government for review this fall.

The news was in response to sharp criticism levelled against ONTC by railway consultant Greg Gormick, who claims that senior management at the Crown agency are not in favour of restoring the Cochrane-to-Toronto passenger train.

Gormick prepared a conceptual plan – “Northeast Lynx: High-Performance Rail Travel for Northern Ontarians” – on its revival for a local rail advocacy group, All Aboard Northern Ontario.

He had been in discussions with an alleged senior executive at ONTC who made their candid feelings known in a private email that Gormick chose to make public.

Mitchell declined to comment on Gormick’s allegations, choosing instead to take Ontario Northland management at its word.

“We can only go on by what they have told me, that being they want to restore passenger rail service, but require that necessary guidance and funding from the province.”

Ontario Northland has not been officially tasked by the Ministry of Energy, Northern Development and Mines (MENDM) to revive the train. No funds for its restoration were included in the Ford government’s inaugural budget.

Mitchell believes in order to fully capitalize on the Metrolinx relationship, Ontario Northland should be shifted from under the umbrella of MENDM and placed under the control of the Ministry of Transportation (MTO), just like Metrolinx, the Crown transportation authority for the Toronto-area.

“We’re a transportation business and we should be in with MTO.”

Mitchell said under the previous Wynne government, Metrolinx work was contracted out to a Québec rail shop, an issue he’s raised with Nipissing MPP and Finance Minister Vic Fedeli.

“If it’s in the same ministry, it’s much easier than putting it out to tender. It would recognize the importance of the Ontario Northland and the great work we do.

“I’ve had meetings with Vic and said we need this work to come to North Bay and keep people employed and benefitting our communities.”

Local 103 represents 400 unionized employees in clerical, shops, supply stores, on-board service and staff at the Cochrane Station Inn. Since October, Mitchell said 49 of his members have been laid off.

“If we can get Ontario Northland moved out of MNDM and into transportation, then we can get a flow of work coming in and get people to work.

“Ontario’s open for business, and so is Northern Ontario, and so is Ontario Northland.”

On June 8, Unifor will be protesting in front of Fedeli’s downtown North Bay constituency office, along with other labour, health-care and social-service groups protesting programming cuts by the Ford government.

The union will be passing around petitions asking for the return of the passenger train and the transfer of the ONTC to MTO control.

Mitchell believes the train can be brought back in stages, beginning with refurbished Metrolinx double-decker commuter coaches running between North Bay and Richmond Hill. By linking up with other transit connections there, ridership can gradually be built up.

Restoring service to Cochrane would require investments in track upgrades to improve speeds and travel time for passengers, he said.

While Mitchell won’t comment on the substance of Gormick’s allegations, he is familiar with the Oshawa-based consultant.

Mitchell confirmed Unifor was approached by Gormick and the All Aboard group last fall for funding of $10,000 to $15,000 to complete the conceptual plan.

“At the time, we didn’t see any need of it,” said Mitchell, “but when the layoffs were announced, we asked (him) if there’s something in your plan that has to do with creating work at Ontario Northland.”

Mitchell said Gormick wouldn’t divulge any details unless Unifor contributed to pay for the report. Gormick insists he won’t release the full report unless he's compensated for his work.

“I’m not interested in that,” answered Mitchell. “Greg has got something he wants to sell, and the way he’s going about it, that’s his way. It’s not my way.”