Training the next generation

Building a home-grown workforce has always been an important to Henry Wetelainen, president of Bending Lake Iron Group.
0
Nov 19, 2009 2:02 PM By: Ian Ross 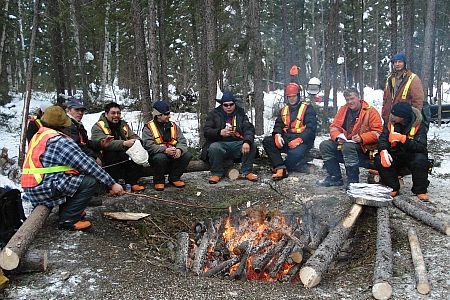 Confederation College students take a break from exploring a property near Ignace owned by Bending Lake Iron Group. The college launched program in August, which runs out of Thunder Bay and the exploration camp.

Building a home-grown workforce has always been an important to Henry Wetelainen, president of Bending Lake Iron Group.

The Thunder Bay-based junior miner is partnering with Confederation College to run a prospectors course at the company's iron ore deposit near Ignace in northwestern Ontario.

For his Aboriginally-owned, family-run company, Wetelainen said it's always been a driving interest in his family to get First Nation youth interested in the grass roots end of the mining cycle.

Wetelainen is so thrilled what he sees he would like to run a larger 20-person class at their bush camp next March.

“This is important to us as a company,” said Wetelainen, who has students from remote First Nation communities such as Gull Bay, Kasabonika and Big Trout Lake. “What's an agreement with the First Nations worth if you can't live up to it?”

The college launched the program in August that runs for an intensive 15 weeks both out of Thunder Bay and at the exploration camp.

The first 14 students enrolled in the program, which is partially funded through Ontario Geological Survey, were due to graduate in November.

Wetelainen has even taken in a few kids with troubled pasts but he working through these personal issues is an investment in training a skilled Aboriginal workforce.

The company helped develop the curriculum for Confederation's mineral prospecting program, provides instruction and opened up their 40-person bush camp to give the students some real hands-on, real world experience at an exploration site.

Students tried their hand at line-cutting, soil and rock sampling, GPS training, running pumps and augers and getting certified to use a chainsaw or ride a quad.

Company geologist Allan Raoul, who once taught prospecting for the Ministry of Northern Development and Mines, helped put the course together. Besides basic geology, he added some deeper skills that a prospector needs to know such as reading and understanding maps, knowing how to option out property and the importance of shares.

John Hatton, Confederation's director of training and development, said this latest course is an evolution of sorts, based on input from Northern First Nations bands and organizations like the Boreal Prospectors group.

“We're talking to (Bending Lake Iron) twice a week and we hear they're all going to have a shot at jobs because of the skills they have,” said Hatton. “We think we've hit the nail on the head with this course because we're getting good feedback and looks like students will get job offers.”

For a college with no history of running mining-related training, partnering with industry to produce field-ready graduates is essential. Confederation launched a basic line cutting course launched in 2006 provided 104 graduates from 12 First Nation communities in northwestern Ontario.

Confederation also offers a more extensive mining techniques program, a one-year basic primer on different aspects of the industry. From there students are parachuted in the second year of the mining technician and technologists programs at Sudbury's Cambrian College or Northern College in Haileybury for more specific training.

“If we're close to industry, we'll better at responding.”

For instance, the college set up a line-cutting course for a Beardmore area First Nations band that wanted its own company so the college inserted a section on small business planning.

Depending on what's required with the curriculum and the availability of instructors, the college can draw these short courses within two weeks to a month.

“It's about working with a client, finding out what they need and putting together a proposal and costing it out,” said Hatton.

The college has even brought training out to communities having run an underground common core program in Marathon in partnership with Williams Mine.

Hatton said these type of short courses are focused on First Nation students because of the slew of impact benefit agreements being signed between Aboriginal communities and junior exploration companies. Recent changes to Ontario's Mining Act, means the college has to keep pace with the latest changes in technology especially as electronic staking becomes more prevalent in the next five years.

That's why the college looks to industry partners such as Premier Gold, Kodiak Exploration and Sage Gold for advice as well as subsidizing training for First Nation students.

Because of the boom and bust nature of the mining, Hatton said the college is very careful about making any guarantees to students about immediately landing jobs. A surface diamond driller's assistant program, delivered with the help of Winnipeg's Major Drilling, has been shelved for a year because of the recession.

When exploration tanks in northwestern Ontario, Hatton said diamond drillers must be prepared to travel to where the work is and be flexible enough to endure extreme climate conditions in any environment.

”It's market-driven,” said Hatton. “There's lots of helpers out there, what companies need now are lead drillers.”