Ten-year-old boy acclaimed for his entrepreneurship

Most kids begin and end their entrepreneurial adventure with a lemonade stand, selling the cold drink to pedestrians for a quarter or two. Calin Ranger tried it once -- for a day -- and thought he could go bigger.
Mar 24, 2011 7:33 PM By: Patrick Demers 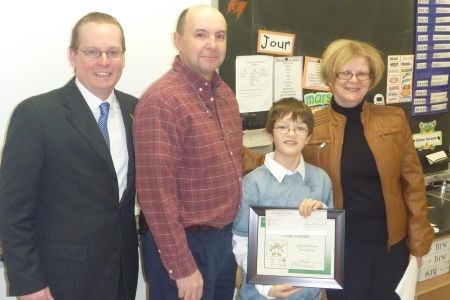 Most kids begin and end their entrepreneurial adventure with a lemonade stand, selling the cold drink to pedestrians for a quarter or two.

Calin Ranger tried it once -- for a day -- and thought he could go bigger.

Earlier this month, the North Claybelt Community Futures Development Corporation awarded the 10-year-old boy its Young Entreperneur of the Summer award for his interactive business plan.

The five-day camp is geared to help teach the fundamentals of the business world to children aged nine to 12.

“They actually go through the process to get a loan from a banker,” said Cindy Reasbeck, Youth Entrepreneurship Advisor for Northeastern Ontario. “It's not a simulation, because they actually get a real loan and then go into production and produce a product which they later sell.”

As they returned home, each camper was given an interactive CD to show them, through an animated business plan assistant, a step-by-step guide on how to write a business plan.

If the camper so chose, they could create one and submit it for an opportunity to win the Young Entrepreneur of the Summer award, and the option of a $200 prize, an iPod or a bicycle.

“The premise behind that was two-fold,” said Reasbeck. “It was to pilot our animated business plan assistant, and to see once the children left camp, if they would continue with their entrepeneur experience.”

Out of all the participants, his business was chosen to take home the first-time award.

“I was really happy because I was against a lot of people who were older than me,” said Ranger.

The CCC Store was designed by Ranger to offer others a chance to buy candy, chips, juice and water at a fair price.

“I wanted to put my name and candy on it, because I mostly sell candies,” said Ranger of his business’ name, “and if I had a mascot it would be my dog Charlie, so it's all C's and I thought it was a good name.”

The winner of the Youth Entrepreneur of the Summer will also have their picture and name placed in a time capsule, which will be opened in the year 2020.

“We'll able to open the capsule and get a good glimpse at what those entrepreneurs are doing now,” said Reasbeck.

The Youth Entreprise Camp is an 11-year project run by the Community Futures Development Corporation.

Funded by FedNor and the Ontario Trillium Foundation, the project originated from another project developed with the Centre for Entrepreneur Education and Development (CEED).

“So we developed this Youth Entreprise Camp out of a project we've worked on with them,” said Reasbeck. “But ultimately the children go through a whole week’s worth of entrepreneurship activities.”

To begin the camp, the children are placed in groups of five or six, and are asked to suggest and select a unique business idea.

Afterwards, they have the opportunity to talk to bankers and ask for a loan, which can get them up to $200.

If the group doesn't make enough money to pay back the loan, it's been agreed beforehand that community service in a Community Futures Development Corporation would be sufficient.

“We've been doing this for 11 years, and they usually don't have a hard time paying back their loans,” said Reasbeck.

Ranger said his idea for his business was simple and was something that wasn't new to him.

He has been buying candy in bulk from Costco and Wal-Mart to package and sell for years now.

Last summer, selling the bagged treats at 75 cents to a dollar, Ranger managed to make approximately $300 in profit.

He set up locations at Theatre Cambrian and baseball parks to take advantage of the flow of traffic.

His mother, Lynn Laverdiere, said he's been asking his parents to sell candy since he was six years old. By the time he was seven, they started to take him seriously.

His mother called the city to find out if he needed a permit, as well the Health Unit to see if there were any rules that needed to be followed.

“He wasn't required to follow any, but it was nice to know them anyway,” said Laverdiere.

Ranger said he will follow the same suit for a few more years, and continually try maximize profit – at least until he is old enough to get a job.

But right now his life is his business, and business is good.