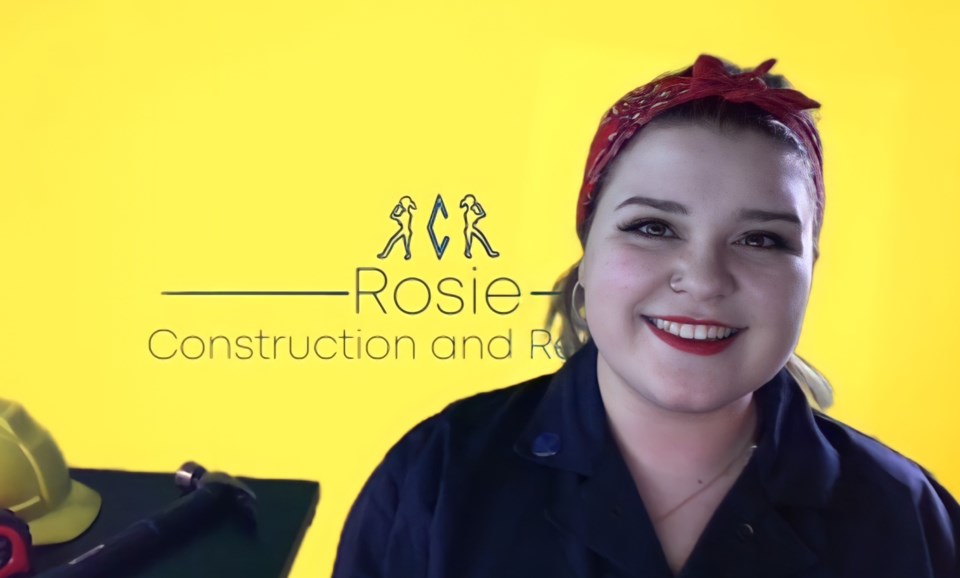 Kate Keaney guesses she was about four years old the first time she picked up a hammer.

Growing up in Sudbury, she naturally gravitated toward skills that enabled her to use her hands, an interest that led to her first career choice.

“Ever since I was little, I loved the idea of trades,” said the Cambrian College student. “Way back when I was in high school, I was always one of those trades kids with a toolbelt and a hard hat on.”

After graduating from college with a diploma in entertainment technical production, Keaney spent four years working behind the scenes on films, in the theatre, for concerts and at other events, constructing sets, designing electrical layouts, building props, and more.

Though she loved the work, it wasn't without struggle.

Many of her supervisors were welcoming and endorsed the idea of having more women in the trades.

But Keaney was often the only female worker on site, and at times was challenged on her credibility and knowledge of the job.

“There's definitely some intimidation that workers and clientele go through, especially if you're female, because it's usually assumed that we don't know what we're talking about, or we don't know what you need even if we do,” she said.

That experience pushed her to return to school and sparked the idea for a new business, Rosie Construction and Renovation. It earned Keaney the top spot at the 2021 Student Innovation Challenge, hosted by Cambrian R&D, the research and innovation arm of Cambrian College.

The annual event invites Cambrian students from across disciplines to pitch their business proposals to a panel of judges. Prizes are awarded to the top three finalists.

Currently in the conceptual stage, Rosie Construction and Renovation would hire women trades workers for jobs including home repair and renovation, painting and plumbing, electrical, HVAC and welding, deck building, or even snow removal and other seasonal services.

Her target market is homeowners aged 50 and up who are nearing retirement and are looking to spruce up their houses, either to sell or so they can remain at home.

The company's name pays homage to Rosie the Riveter, the Second World War-era cultural icon that came to symbolize the women working in American factories and shipyards while the men were fighting overseas.

“I was always known as ‘Rosie the Riveter’ growing up, and the idea of her was so idolizing for me,” said Keaney, who has completed the first year of Cambrian's three-year business administration program.

“So I thought this would be a really cool way to honour that image and bring back that reality of 'we need more women.'"

But she cautioned against viewing the company as a novelty; the goal is to create real equity for trades workers who identify as women.

Keaney's research suggests she's on the right track. Federal government statistics indicate 700,000 Canadian trades workers are poised to retire by 2028. Ontario alone will face a shortage of around 100,000 workers.

Recruiting more women for the trades can alleviate that deficit, while also providing room for them to grow in the industry.

“I think it's so important because it's something I was absolutely seeing was lacking in the field," she said.

“I want to close those gaps of equal pay, not just serving clientele but also serving our workers as well."

Winning the Student Innovation Challenge has already opened some doors for Keaney, who calls the experience “just amazing.”

She's proud that all four women in the competition made it to the finals, narrowed from a field of 15.

But it may be some time before she sees her idea through to fruition.

Keaney wants to complete her coursework at Cambrian before pursuing a bachelor of commerce degree. She wants to do additional market research and learning through mentorship before she's ready to launch.

If it takes off, she envisions multiple community partnerships taking shape: working with Cambrian and Collège Boréal to arrange placements for students; providing mentorship to high schoolers interested in the trades; and even collaborating with daycares to help single mothers pursue a career in the industry.

All of this is still in the future, of course, and there are many details to be worked out.

Yet Keaney remains passionate about raising other women up and into a field that's ripe with opportunity.

“This is absolutely an issue that Canada is facing, and it needs to be fixed somehow, because nothing will happen if something doesn't change,” she said.

“Someone has to take the step forward, and I'm happy to be one of those people.”