North Bay's Voyageur Airways has made a twin-engined donation to Canadore College's school of aviation.
0
Sep 14, 2009 7:58 PM By: Ian Ross 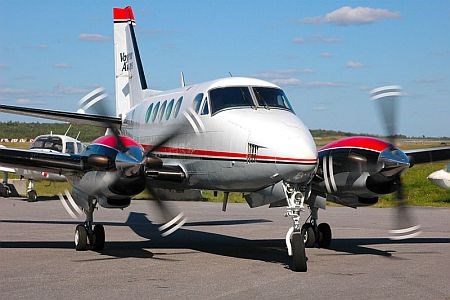 The twin-engined Beechcraft will be used as a training aid for Canadore's aircraft maintenance and avionics students (Photo supplied).

North Bay's Voyageur Airways has made a twin-engined donation to Canadore College's school of aviation.

The air charter and aviation maintenance company taxied a Beechcraft Kingair Model A100 down the runway from their at Jack Garland Airport over to the college's aviation campus for a handing-over ceremony, Sept. 10.

The commuter aircraft, outfitted with modern turbine engines and valued at $500,000, will used as a training aid for students.

“This is the single largest (donation) in terms of an aircraft in our hangar here and the single biggest donation in my five years here,” said Darrin Caron, Canadore's dean of trades and technology.

The Beechcraft will be added to their smaller fleet of mostly Cessnas and Piper aircraft. The last plane donated to the college was a vintage 1959 Cessna that flipped over in Trout Lake during a wind storm.

Since Canadore does not have flight training, the aircraft maintenance and avionics programs will probably get the most use of out the Beechcraft.

“We will be able to taxi that plane but from our standpoint it will never fly again,” said Caron.

Voyageur has been providing charter, ambulance and maintenance services for aircraft from all over the world since 1968, has enjoyed a mutually beneficial relationship with Canadore.

Company president Max Shapiro has been a staunch supporter of the college's aviation program with previous donations of equipment and parts as well as hiring 67 Canadore graduates for their maintenance and administrative departments.

“We're so pleased and appreciative of Max that he thought of us and sees the value in Canadore with the spot we have in education and the fairly robust aviation cluster in the city,” said Caron. “And we do pump out graduates that stay local.”

“We pleased that they're so pleased,” said Shapiro. “It's a great addition for them and we're pleased to be able to contribute to the college in a meaningful way.”

About 25 Canadore grads, employed at Voyageur, attended the donation ceremony.

“We hire a lot of their graduates and that's important here in the North because it's so difficult to get qualified technical people so they've been very valuable to us in growing our company,” said Shapiro.

Company officials also serve on the college's advisory board and some ex-Voyageur employees serve as Canadore instructors.

Caron said one instructor remembered working on the Beechcraft as young engineer apprentice.

The company bought the previously-used plane in 1986.

The Kingair was getting near the end of its service life having logged more than 14,000 hours of flight time with more than 16,000 landings as a charter aircraft .

The plane can accommodate nine passenger seats, six executive seats and two patients if used as an air ambulance.

In a statement, Canadore President Barbara Taylor thanked Voyageur for the donation and its ongoing support through the years including a “significant” donation when the 82,000 square-foot Aviation campus was built in 2002.

“We are proud of the fact that so many of our graduates are employed by Voyageur and we take great pride in their accomplishments.”

The aviation school has 241 students enrolled, including 46 international students formed through a partnership with a civil aviation college in China.

Aviation programming has witnessed a 13 per cent jump in first-year students over last year.

Caron attributes that the strength of their program and a surge of mature students coming back for retraining. Many of the skills learned in aviation maintenance are transferable to other industrial sectors.

Many Canadore aviation grads never make it into the industry because they're prized by all manufacturers, especially in Alberta, for their expertise in hydraulics, pneumatics and electronics.