Laurentian University had ‘extensive conversations’ with province before insolvency filing

‘You’re not telling us something here,’ says MP Charlie Angus, as LU pres questioned at House of Commons committee
May 27, 2021 9:31 AM By: Heidi Ulrichsen 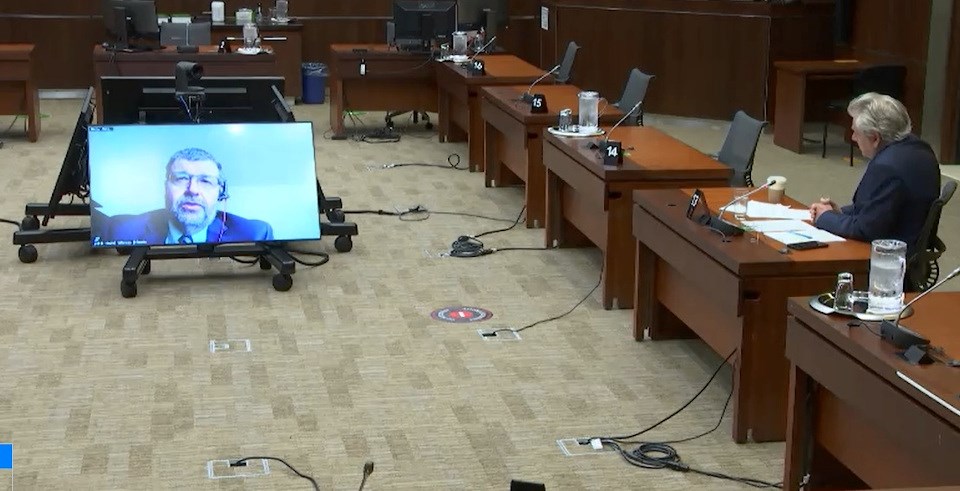 Sudbury's Laurentian University had “extensive conversations” with the province in the months leading up to its decision to file for creditor protection under the Companies’ Creditors Protection Act (CCAA).

That’s according to Laurentian president Robert Haché, who faced questioning May 25 by MPs in a hearing of the House of Commons Standing Committee on the Status of Women.

The committee was studying the issue of midwifery services across Canada. Laurentian University’s midwifery program was among the 69 programs cut by the university last month as part of its restructuring.

However, the NDP’s Charlie Angus, who’s the MP for Timmins-James Bay, wanted to know how, exactly, the insolvent Laurentian ended up filing for creditor protection, a situation considered unprecedented in the post-secondary sector.

Angus asked Haché if he went to Minister of Colleges and Universities Ross Romano or the federal government “to try and get some breathing room.”

“This is about finding breathing room to work with your creditors,” Angus said.

“Did Minister Romano tell you you were on your own, or the federal government? Why were you not able to get that breathing room?”

Haché replied that in the months leading up to the CCAA filing, the university “indeed had extensive conversations with the Ministry of Colleges and Universities, also with the minister’s office, i.e. the province.

“We also had conversations at the federal level with what could potentially be done. I can’t comment on the decision making process at the government’s end. All I can say is at the end, we were left with no alternative.”

Angus said the use of the CCAA “doesn’t make sense.” He said the university went from saying a year ago it was “almost at a balanced budget” to a $7 million debt last fall and finally saying “in the last week of the school year” there was a choice of shutting the school down or “make these massive cuts.”

“Who made that decision that those were your only two options?” Angus said. “You’re not telling us something here.”

“Were you not aware that that debt was there, or were you using their process for other reasons to cut your staff with your collective bargaining agreement.

“Why did you go from telling people that you were almost at a balanced budget to telling us you had to shut the doors, and that took place in less than a year.”

Haché replied: “Simply, it was required that we have a balanced budget. At that point, Laurentian had no additional capacity to take on additional debt.” He said LU “has had the poorest financial health of any university of the province,” and was severely impacted by the pandemic.

The press release said that in particular, the MP “wants clarification over the nature of discussions with the provincial and federal government in the months leading up to the decision to go into bankruptcy protection.”

Laurentian University announced Feb. 1 it is insolvent, and had filed under the CCAA, a move that’s unprecedented in the post-secondary sector. The university, which had $321.8 million in liabilities as of April 30, 2020, said it would have run out of cash to meet its payroll obligations by the end of February if it hadn’t secured a $25 million debtor-in-possession (DIP) loan through the insolvency process.

Under the auspices of the CCAA, Laurentian is undergoing court-supervised restructuring. That includes massive cuts to its programs and employees, which were made public April 12, as well as the termination of the agreement with federated universities operating on campus. After securing another $10 million DIP loan and another four months’ of creditor protection,

Laurentian is now in phase 2 of its restructuring, which will last until Aug. 31. Phase 2 will include a review of its assets and real estate holdings to see if they can be monetized, as well as coming up with a plan to deal with its creditors.

Those creditors include Laurentian’s terminated employees, who have to join the creditors’ pool in an attempt to receive their severance. With respect to its midwifery program — ostensibly the topic under examination by the Commons Committee Tuesday — Haché said it's a very expensive program to deliver relative to Laurentian’s other programs.

He said the program, which was offered in both French and English, is capped at 30 students per year, “with faculty and support” duplicated in each language.

“With revenues capped well below the cost of delivery of the programs, in a situation where decisions needed to be made to restore the financial viability of the university, it was no longer possible for Laurentian University to offer these programs,” Haché said.

Current Laurentian midwifery students will be able to finish their studies through these universities. Nickel Belt Liberal MP Marc Serré wanted to know if Laurentian’s midwifery program could instead be transferred to the Northern Ontario School of Medicine or Collège Boréal, thus keeping it in Northern Ontario.

He also expressed concern about the impact of the program’s cut on Northern Ontario’s francophone and aboriginal communities. McMaster and Ryerson have “very little indigenous and French experience,” Serré said.

Haché said the decision to redistribute the midwifery student spots to the other consortium partners was done in the best interest of current students, so their education and clinical placements won’t be interrupted. The midwifery students will be attending classes virtually, so they will be able to stay where they are for now.

“All clinical placements will continue to happen in the north,” Haché said, adding that there will be “French-language opportunities” for the students in the francophone midwifery program.