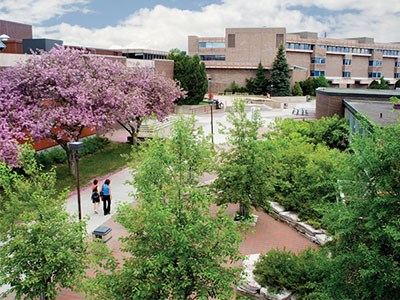 The newly minted Centre of Excellence for Sustainable Mining and Exploration is hosting an event aimed at examining past, current and future public policy and how it promotes sustainable mining development.

“The Role of Government Policy in Sustainable Mining Development” is set for December 5-6 at the Thunder Bay campus.

“It's our first major event to advance our goals as a centre,” said institute director Peter Hollings.

The conference will bring together Canadian and world leaders in mining policy and mineral development with speakers and representatives from First Nations, Metis, local communities, government and industry attending.

Hollings hopes the dialogue can be elevated beyond the usual rhetoric and platitudes to delve more in-depth into the main issues and challenges of mineral development that his institute wants to embody.

“One of our goals is to advance resource development in Northern Ontario and we recognize that having some clarity about mining policy – and what works and what doesn't – is really something we need to be focusing on,” said Hollings.

Among the topics to be discussed are infrastructure, Aboriginal and community engagement, environmental protection, workforce, taxation, benefit-sharing and business development.

On the presenters' list are Laurie Sterritt of the BC Aboriginal Mine Training Assocation; Bill Gallagher, noted strategist on Aboriginal issues; Steve Lindley, SNC-Lavalin's vice-president of Aboriginal and Northern Affairs; and Bob Rae, chief negotiator for the Matawa First Nations tribal council.

The format features a series of roundtable discussions based on key issues raised by the speakers.

“I don't know how successful we're going to be,” said Hollings, “but we're ambitious that at the end of it we're actually going to come up with the recommendations we can take forward.

“We've got good buy-in from the Metis and First Nation groups; Bob Rae will be there, and we encourage the politicians to see what's being said.

“I'm hopeful some people come out of the room with a better idea of what the challenges and issues really are.”

The centre, which was officially launched last March, is modeled after successful mining institutes Hollings experienced in Australia and Tasmania.

It's focused on mineral exploration, the environment and First Nations engagement by tackling the cultural and information exchange between industry and Aboriginal people.

Securing money for industry-funded research has been hard to come by from many struggling junior miners.

“The responses we're getting from the companies are, we love this idea. Come back and see us when stock prices go up,” said Hollings.

“It's an unfortunate time in the industry but it's also a critical time with everything that's going on with the Ring of Fire. There's a real need for that third party, honest broker who isn't government or the mining companies to try and move things forward.”

Hollings said the centre of excellence has started some collaborative research efforts with area First Nations such as working on a traditional knowledge gathering project.

Hollings hope this inaugural event can be a demonstration that the institute is doing something worthy of corporate support.

“This first meeting is the first step to show that we're not just talking, we're actually going to try and achieve something here and come up with some concrete steps forward.”

For details on the conference and to register online visit www.cesme.lakeheadu.ca.