If you ask Grade 9 student Maddison Loiselle, stereotypes around the trades are shifting with her generation. Loiselle said her Grade 9 wood shop class at Sudbury's École secondaire du Sacré Coeur had more girls than boys.
Apr 9, 2015 2:11 PM By: Jonathan Migneault 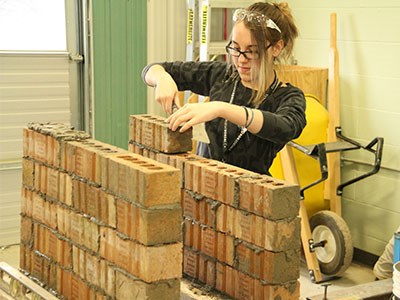 Zoee Picard, a Grade 9 student at École secondaire catholique Algonquin, in North Bay, tried her hand at masonry during Collège Boréal's Trades and Technology Exploration Day for the Young Women event March 3. The event was meant to introduce girls in Grades 9 and 10 to the skilled trades and the job opportunities in those fields.

If you ask Grade 9 student Maddison Loiselle, stereotypes around the trades are shifting with her generation.

Canada is facing a skilled trades shortage, and women, who represent around half the workforce, hold only 20 per cent of registered apprenticeship certificates, according to Statistics Canada.

Around 40 per cent of skilled trade workers in Canada are over the age of 50 and are nearing retirement.

Those retirements, along with changing market demands, will lead to 500,000 skilled trades job openings by 2020.

Last year, Collège Boréal held its inaugural Women in Trades Forum to address the skilled trades shortage and find ways to encourage more women to enter workplaces that have not historically welcomed them.

On March 3 the college expanded its efforts to reach out to young women with its inaugural Trades and Technology Exploration Day for Young Women.

Collège Boréal welcomed nearly 100 young women from high schools across the Sudbury and Nipissing districts to try their hands at two trades of their choice.

Denis Brouillette, Collège Boréal's manager of trades and apprenticeships, said Grade 9 represents a key moment when high school students are about to choose the streams and courses that could dictate their future choices for post-secondary education, and their careers.

“Having the experience of working with tools, and seeing they can do it, possibly gives them the incentive to learn more about it,” he said, regarding what might have been many of the students' first exposure to the trades.

Loiselle said she already has a strong interest in carpentry – which was one of the trades she tried March 3. She sees the trade as a possible career path.

Rowan Cormier, a Grade 9 student at Sudbury's École secondaire MacDonald-Cartier, said she would like to pursue a mechanical trade that would let her “build and repair stuff” as a career.

Collège Boréal has a pre-apprenticeship program for women that includes classroom and hands-on learning, and incorporates a two-month work placement to connect the students with employers and gain valuable work experience.

The pre-apprenticeship program for carpentry, for example, lasts 37 weeks.

Brouillette said after many talks with women in the trades, he found women-only classrooms aren't necessary, but a female-only introduction to the trades can help make participants more comfortable.

“For the first initiation we need to build their confidence,” he said.

Brouillette said the college plans to reach out to more young women and promote skilled trades as viable career options.

Some experts have suggested colleges should introduce girls in Grades 7 and 8 to the trades, so they can make informed choices about their career paths before they start high school.