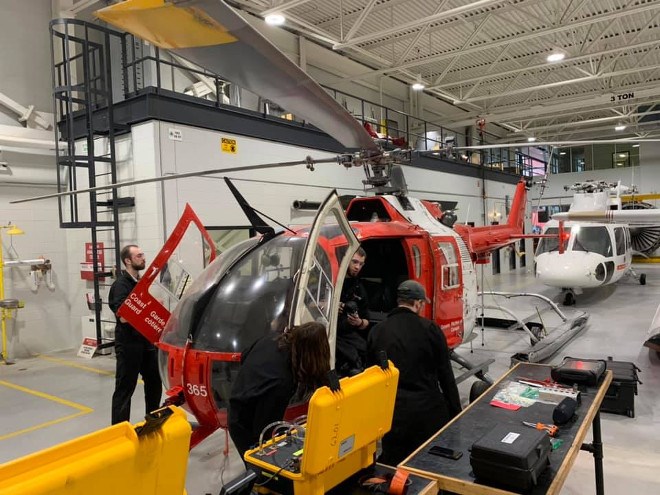 Canadore College has taken possession of a decommissioned coast guard helicopter donated by the federal government.

Nipissing–Timiskaming MP Anthony Rota made the announcement at the North Bay campus, May 22.

The college’s aviation technology program received a Canadian Coast Guard Messerschmitt-Bölkow-Blohm BO105 helicopter. It will be used for hands-on training in the college's mechanical and engineering programs.

Canadore is one of nine colleges and training institutes across Canada that each received one of the 10 helicopters that were in service in the coast guard for more than 30 years.

“The BO105 exposes our students to a more diversified fleet of aircraft and provides insight into the services provided by the Canadian Coast Guard,” said Canadore associate dean of aviation technology Ahmed Obaide in a news release.

"Students from Canadore College will benefit from the Government of Canada's donation. There is nothing like being able to provide students with the opportunity and tools they need to further advance their skills and prepare them for the kinds of real life projects they will face after graduation,” said Rota in a statement.

The rotary wing aircraft have been used in operations such as icebreaking, marine communication, aids to navigation, environmental response, waterway protection, conservation and protection, scientific missions with other government departments.

These aircraft have been replaced in the coast guard air fleet by Bell 429 light helicopters and Bell 412EPI medium-lift choppers.