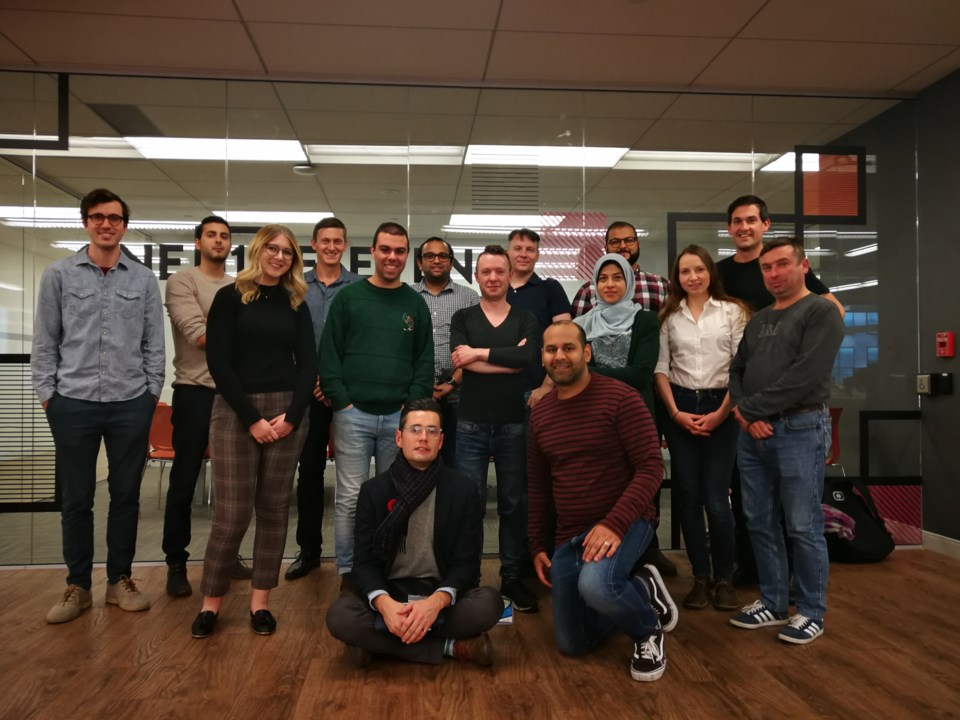 A Sudbury startup medical device company is about six months away from commercializing its product after winning a prestigious award in Boston this fall.

Flosonics Medical, founded in February 2015, is focused on making a wearable ultrasound monitor to help clinicians with precision fluid management.

Company CEO Joe Eibl, one of four co-founders, explained that 10 years ago, it was common practice to treat critically ill patients with low blood pressure by pumping them full of fluids indiscriminately, which would increase blood flow.

This technique was important for critically ill patients experiencing shock, sepsis, and any other kind of major trauma.

In the late 2000s, a body of research emerged in the medical community highlighting the dangers of this practice for some patients. Fluid resuscitation needed to be monitored closely, especially in people with weaker hearts.

Dr. Jon-Emile Kenny, who was an ICU doctor (and Eibl's college roommate), one day divulged how difficult and time consuming it was to monitor a patient's fluid intake via traditional ultrasound. It was often a slow, inefficient two-man job.

Kenny and Eibl, along with brother Andrew Eibl and Sachit Harish, put their heads together after this conversation.

Their solution was to develop a really simple, push-button, peel-and-stick device that any paramedic, nurse, or physician could use to monitor patient response to fluid intake in real time.

When Eibl and Kenny first developed the idea for the FloPatch, they had no idea where to start.

“I came out of academics, and Jon was coming out of the clinic,” Eibl explained. “We didn't know anything about starting a medical device business.”

They brought their idea to the NORCAT Innovation Mill in Sudbury and connected with some mentors to point them in the right direction with their business plan.

The Ontario Bioscience Innovation Organization taught Flosonics what they needed to know to become a financeable company. Their acceptance into the Lazaridis Institute's Scale-Up program set them up for global success.

Today, with the help of angel investments, multiple grants and awards, and the support of a wider network, Flosonics has secured development contracts with the Canadian and U.S. militaries, achieving international recognition.

This past summer, Flosonics announced it they had been selected as one of 50 medical device startups to attend the MedTech Innovator 2019 Showcase and Accelerator.

The company was one of more than 800 companies that were vying for $350,000 in startup funding during the MedTech Conference in Boston this past September.

Ultimately, Pittsburgh-based Forest Devices was selected as the winner, but Flosonics Medical was one of five runners-up, securing $25,000.

This is no small feat. Massachusetts is a hub for biotech, pharmaceutical and life sciences companies, and MedTech is considered one of the world's best medtech ecosystems.

The entire competition was a year-long experience that gave Flosonics the chance to work with industry mentors and build its network as it approached commercialization.

“One of the things I wish I knew 10 years ago was how important a network is when you're trying to get a new product or a new company off the ground,” said Eibl.

Being located in Northern Ontario has been both a challenge and a benefit for the company.

At times, they have felt isolated from the wider med-tech community, which is mostly concentrated in parts of the United States and Europe.

But they have also been grateful to take advantage of all the opportunities available in the region.

“We've been really fortunate in that there's a really good pathway for people like us that Ontario has fostered.”

Flosonics Medical now has 15 employees. For the past year, they've been doing clinical trials at Health Sciences North in Sudbury to gather patient data in a clinical setting.

Initially, they plan to manufacture the commercialized FloPatch in Sudbury, and they will be looking to add to their team in the near future. They have a few undisclosed clients signed up already, and plan to launch the product either in the first or second quarter of 2020 using a phased and cautious rollout, scaling up as they go.

The entire process, according to Eibl, has been “amazing,” and “lots of fun.”

Their project now is to steer the ship as their momentum continues to gain.