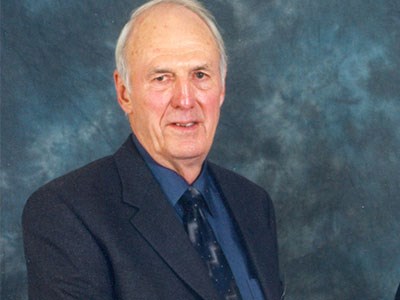 Sudbury business pioneer Don Steel was recognized as the Entrepreneur of the Generation during the Northern Ontario Business Awards in 2000.

A pioneer of Sudbury’s business community died Aug. 19 at the age of 86.

Donald Steel was born in Drake, Sask. in 1928, and was raised in Teeswater, Ont. He settled in Sudbury in 1946, and established Steel Electronics in 1958, which sold two-way radios.

Along with business partner Tom Smith, Steel was at the centre of the newly conceived telecommunications industry.

Steel Electronics and its several subsidiaries went on to do everything from providing region-wide paging to servicing traffic lights to installing communications towers.

He sold Steel Electronics and its subsidiaries to Northern Telephone in 1986, although he eventually became a silent partner to several of these companies. He remained involved in business until his death. “He retired four times, actually,” said his daughter, Leslie Steel. “I think we had four retirement parties.”

For his contribution to the Sudbury business community, Steel was recognized as Entrepreneur of the Generation during the Northern Ontario Business Awards in 2000. “One has to take risks to achieve success,” Steel said, at the time. “You can’t stand still, or you’ll go backward.”

He credited his success to exceptional employees. “You’re dependent upon them to a great extent,” Steel said. “We’ve been blessed to have some very good people. They’re exceptional.”

Steel’s obituary said he was passionate about his family, his politics, his golf and his favourite single malt scotch.

It said he’s remembered with love and gratitude for his personal values, ethics, integrity and perseverance — qualities he shared most generously.

Leslie Steel said she’ll always remember her father with pride. “I’m very proud of him for a number of reasons — because he had so much integrity, because he did everything on his own, and because he never took no for an answer,” she said. “He was a really strong man.”

A funeral service for Steel was held Aug. 23. He is survived by his wife of 65 years, Lina (Urso) Steel, his three children and seven grandchildren.