Hearst distillers Marcel Rheault and Mireille Morin have more acclaim to add to their growing collection of accolades after participating in the 2015 China Wine & Spirits Awards (CWSA).
Sep 23, 2015 3:29 PM By: Lindsay Kelly 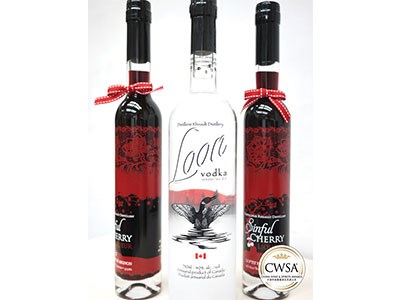 Earning high ratings in China is helping Rheault Distillery move into exporting its spirits to the Asian market.

Hearst distillers Marcel Rheault and Mireille Morin have more acclaim to add to their growing collection of accolades after participating in the 2015 China Wine & Spirits Awards (CWSA).

“It’s a really big thing; it’s going to open a lot of doors,” Rheault said. “It’s something to come out with a product and then get it approved by the people that are behind (the show). Then it’s easier to sell it to the public, once you get ratings like that.”

As the biggest and most prestigious wine and spirits competition in Hong Kong and China, the CWSA recruits the top 100 importers, distributors and retailers from across China as its judges. Earning a CWSA medal is a powerful endorsement of the quality and suitability of wine and spirits for the Chinese market.

Unlike sport-judging criteria — in which gold equals first place, silver rates second, and bronze comprises third — wine and spirits earn points based on their appearance, aroma and flavour, and so more than one spirit can earn the same medal.

But the criteria are stringent, and experienced judges know what to look for, Rheault said. His Loon Vodka had to earn between 95 and 100 points (out of 100) to receive a double gold rating; to get a gold, the Sinful Cherry Liqueur had to earn between 90 and 95 points.

Rheault is hoping the awards will help him export his spirits to the Chinese market where there is a steady demand by the wealthy upper class for high-end alpha vodkas like his. It also means he can command more for his product.

“If I start to sell vodka in China, what happens is I can get a higher price for it, because they know how much an alpha vodka is really worth,” said Rheault, noting he’s been working with the Ontario government to help him navigate his way into the Chinese market.

April denoted the one-year mark since the LCBO started stocking Loon Vodka on its shelves. Rheault said, as part of his contract, the vodka had to sell at least $385,000 in sales to reserve its shelf space in its first year. The vodka went well beyond its expectations, selling five times its quota.

Sinful Cherry has been equally successful. The LCBO bought 75 cases on a trial basis, selling 32 cases in its first week alone.

“The week after, they had to reorder 25 cases, and the week after, another 75 cases, so it seems like it’s doing really good,” Rheault said.

Rheault and Morin, his partner in life and business, have been a big part of its success. They’ve travelled extensively across Ontario, staking out taste-testing events to get people to try their vodka, which Rheault admits can be a hard sell at $45 a bottle. But he insists a market is out there.

“We’re not going for the guy that buys a bottle of Smirnoff,” he said. “It’s not the market that we’re trying to hit. It’s the market for the (drinkers of) Chopin and the high-end vodkas. I think people at that age can afford a bottle like that. They’re going to taste it and not only drink it to get drunk.”

With success comes a need for expansion, a move Rheault anticipates within the year, which would allow him to move his distilling equipment out of his living room and into a bigger facility. It may also require him to hire more staff, which currently consists of him, his wife, and their 19-year-old son, Sam.

Rheault is also producing whiskey, and currently has 42 barrels distilled and aging; he anticipates having seven barrels ready to bottle in about a year. It will likely be registered in the Vintage section of selected LCBO stores.

Sudbury businessman creates alcohol-free hand sanitizer
Sep 24, 2020 5:00 PM
Comments
We welcome your feedback and encourage you to share your thoughts. We ask that you be respectful of others and their points of view, refrain from personal attacks and stay on topic. To learn about our commenting policies and how we moderate, please read our Community Guidelines.