When Jeff Scharf first set up a prototype of his four-season greenhouse, he was mostly looking to test the performance of its envelope, and he planted a few seeds as an experiment. But he didn’t anticipate just how well it would work.
Sep 23, 2015 3:19 PM By: Lindsay Kelly 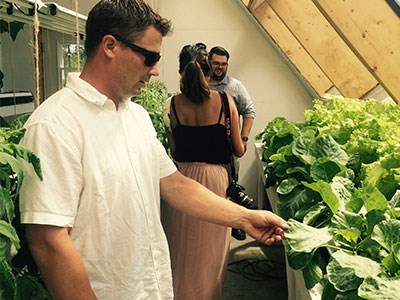 When Jeff Scharf first set up a prototype of his four-season greenhouse, he was mostly looking to test the performance of its envelope, and he planted a few seeds as an experiment. But he didn’t anticipate just how well it would work.

“Within weeks we were cropping all our lettuce; our cucumbers were putting out 40 to 50 pounds per week, and we only have four plants,” Scharf said. “It’s been amazing.”

In August, Scharf launched the design through Greenhouses Canada, an offshoot of the Helios Group of Companies, established by Scharf and his partner, Trevor Tario, four years ago. The greenhouse technology was developed in partnership with Cambrian Innovates, the research arm of Cambrian College, and Helios Whitefish River First Nation.

Espanola-based Helios, known for developing solar power technology, began working on the greenhouse idea four years ago after striking up a partnership with Whitefish River, located along the North Shore of Lake Huron.

“We always envisioned a community-based greenhouse operation as kind of our main focus, because the whole idea at the beginning was to help the Far North First Nation communities become self-sustaining with their food development,” Scharf said. “That’s basically what the model has been.”

Conventional greenhouses constructed of glass can’t be used year-round in areas with colder climates like Northern Ontario, limiting the growing season, Scharf noted. Remote First Nation communities are then forced to pay exorbitant amounts for produce that’s flown in, and by the time it reaches the communities, it’s lost most of its nutritional content.

Greenhouses Canada uses solar panel technology combined with existing technologies and growing methods, such as hydroponics and aquaponics. The solar panels are rated at an R value of 66, and are manufactured with easy installation in mind.

“We’ll be able to manufacture the wall panels, get them shipped to site, and just basically assemble them like Legos once we’re on site,” Scharf said.

The company’s second commercial-grade greenhouse will be constructed in Whitefish River First Nation in the spring, and additional greenhouses are planned for Atikamekshing First Nation, just outside Sudbury, and Sagamok First Nation, located west of Espanola.

Greenhouses Canada conducts in-depth community consultation to determine the needs of the community, which determines the size of greenhouse needed, Scharf said.

“Our motto really is to meet our clients’ needs,” he said. “A lot are wanting to take the community off the produce grid and be able to increase jobs and increase health, so often they ask us to size it to feed a community.”

Each greenhouse will operate a corresponding farmers market where the community can sell the produce it grows, Scharf said. Economic leakage studies show that up to 98 per cent of spending by residents is done off-reserve. Scharf believes that number can be reduced by growing and selling produce in the community, providing the added benefits of healthy food and job creation.

The company will manage the facilities, but train people in the communities in agricultural and growing practices to work in the greenhouses. Jenny Fortier, who has experience in agriculture and seed cultivation, will take over her role as greenhouse and aquaponics manager in October, and will develop training modules for the staff.

Over the next six to eight months, Scharf hopes to engage more clients, while continuing to advance the technology.

Indigenous business underrepresented in government procurement opportunities
Oct 20, 2020 12:33 PM
Comments
We welcome your feedback and encourage you to share your thoughts. We ask that you be respectful of others and their points of view, refrain from personal attacks and stay on topic. To learn about our commenting policies and how we moderate, please read our Community Guidelines.