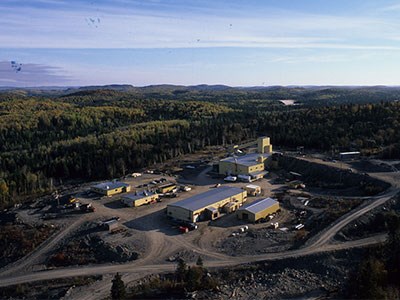 Wesdome Gold Mines is cranking up gold production at its Eagle River mine complex near Wawa.

In a news release announcing its third quarter results, the Toronto-based miner reported gold production at Eagle River is up 29 per cent from the second quarter, amounting to 70,356 ounces.

The company said they’re getting great production in the 303 area of the mine, and the cash costs per ounce are on the low side.

In a statement, president-CEO Duncan Middlemiss said: “We have taken this opportunity of high production and favourable gold prices to accelerate our work within the Eagle River tailings area to increase capacity, install and commission a new Falcon Gravity Concentrator in our Eagle River mill, and enhance exploration platforms within the Eagle River Mine, in order to position the company for future performance improvements.”

Wesdome has a massive 114,000-metre exploration campaign underway of infill and step-out drilling to find more gold at Eagle River with five drill rigs turning underground and one on surface.

The company’s flagship operation is Eagle River where it mines from two deposits. It’s running a exploration program at its Kiena Complex, a former gold producer, near Val d’Or, Que, and has another gold prospect in the pipeline at Moss Lake, 100 kilometres west of Thunder Bay.