Trudeau still has eyes on the Ring of Fire 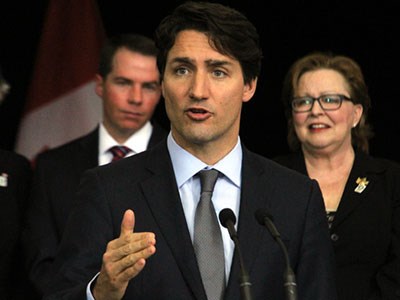 Prime Minister Justin Trudeau hinted that federal support in some form could be announced soon related to the stalled Ring of Fire mineral project.

Prime Minister Justin Trudeau hinted that federal support in some form could be announced soon related to the stalled Ring of Fire mineral project.

Trudeau dropped that tidbit of information during a March 7 visit to Sudbury to announce long-awaited federal funds for Maley Drive, a critical arterial road infrastructure project that’s been 30 years in the making.

When asked by a reporter if an access road could be built into the remote mineral belt by this summer, Trudeau responded: "We know that the Ring of Fire means good jobs, means continuing development of the North in ways that hopefully will build the kind of sustained partnerships with Indigenous communities that have been too long absent from the economic growth landscape."

After consulting with provincial and First Nation leaders on their infrastructure priorities, Trudeau said he hoped to have more to say on the Ring in “the coming months.”

In the March 22 budget, the government earmarked $8.4 billion in planned spending to improve First Nations’ education, on-reserve water quality, social and healthcare infrastructure across Canada over the next five years, but nothing was set aside to match Ontario’s $1-billion pledge for mining-related infrastructure in the James Bay lowlands.

David Achneepineskum, CEO of the Matawa First Nations, a tribal council of communities closest to the remote mineral deposit, was disappointed that nothing was mentioned in the budget documents about mining infrastructure.

But it’s sunny ways for Sudbury as the project the city has tried to finance for three decades will become a reality.

“I am pleased to announce that the Government of Canada will invest $26.7 million in the Sudbury Maley Drive extension project,” Trudeau told a crowded atrium at Tom Davies Square. “My government is proud to invest in Sudbury, and the people who call it home.”

Flanked by city council, three federal MPs and Sudbury MPP Glenn Thibeault, Trudeau reminded the crowd his government has pledged $120 billion for infrastructure over the next 10 years.

He said his government is backing Maley because that's what municipal leaders have picked as their priority.

In a release after the news conference, the city said the total budgeted cost of Phase 1 of Maley is $80.1 million. The province announced its $26.7 million share in 2014. Based on the 2016 budget, the City has reserved $15.4 million for the project, to ensure its shovel-ready status, with money designated in future budget years to fund the remainder of the project.