A new Sudbury company hopes to make it easier for mines to use drones and autonomous vehicles underground thanks to 3D mapping technology.
0
May 15, 2015 3:38 PM By: Jonathan Migneault 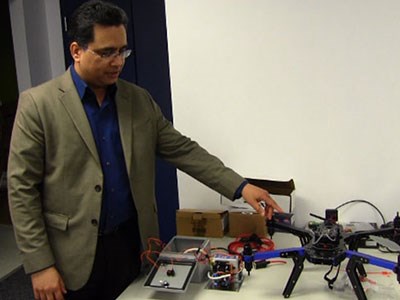 Clickmox president Syed Naeem Ahmed shows a 3D scanner his company can use to map mines to make it possible for autonomous vehicles to find their way underground.

A new Sudbury company hopes to make it easier for mines to use drones and autonomous vehicles underground thanks to 3D mapping technology.

Syed Naeem Ahmed, a physicist who worked in Sudbury's underground neutrino laboratory for five years, started Clickmox Solutions after his work with that project ended.

“We want to be the go-to place for innovative products and technologies,” he said in his office at the Northern Centre for Advanced Technology.

Automation improves productivity and makes mines safer by not placing workers in risky situations. But the industry still has a long way to go before automated vehicles become commonplace in most mines.

One of the big hurdles is navigation.

Drones typically use the Global Positioning System (GPS) to know where they are and where they're going.

But GPS, which uses a network of satellites to pinpoint location, isn't possible in an underground mine.

The solution is to use 3D scanning technology to create digital maps of underground mines.

Autonomous machines can then have those maps uploaded to their memories, and know exactly where they are in the mine. They can then move around without bumping into walls or other objects.

Most 3D mapping solutions, however, can cost more than $250,000 and weigh three kilograms or more.

Through Clickmox, Ahmed and his team have worked to develop a low-cost system that is much lighter, and can be attached to a drone so it knows exactly where it's going in real-time.

Using off-the-shelf parts, they've taken a relatively cheap 2D laser scanner, and have attached it to a small pivoting platform. The motion from the platform adds the third dimension.

Clickmox has also developed an algorithm in-house to make sense of the data the scanner collects and create detailed 3D maps that are accurate up to one centimetre.

The company is still working on patenting the technology, but sees it as a game changer for underground automation.

Ahmed said they could sell individual scanning systems for around $4,000.

The uses for 3D scanning in a mine go beyond navigation. His team has modified a small drone so it can carry a 3D scanner.

The drone can be flown underground, and using the laser scanner can inspect mine drifts – a job that is currently done manually.

Workers inspect and measure mine drifts on a regular basis for safety, to see if any changes have happened over time.

The drone could do the same work more efficiently and with more accuracy, Ahmed said, without risking human lives in the process.

It could instantly compare its latest measurements to past ones. Those changes would be reported to a manager, and the proper precautions could be taken if any inconsistencies are found.

Clickmox has also worked with Glencore on a small robot that can clear boreholes – vertical holes used to transport materials from the surface to the lower levels in a mine.

The robot is equipped with a drill which it uses to break apart rock-clogging boreholes.

Clickmox currently has five employees, but Ahmed has ambitious plans for the company.

He wants to eventually extend into manufacturing, to build the devices it designs.

As an adjunct professor at Laurentian University, an important goal for Ahmed is creating more high-tech jobs and taking in students for placement opportunities.