MacDonald Mines advancing its case to bring former gold mine back into production
0
Nov 18, 2019 2:21 PM By: Northern Ontario Business Staff 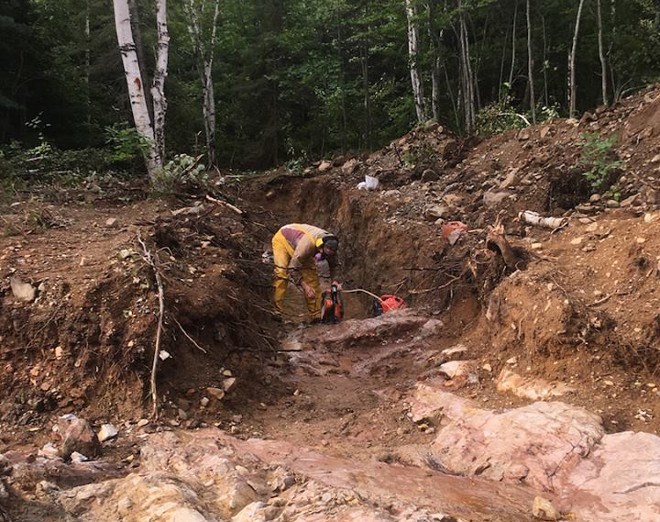 MacDonald Mines is encouraged by the latest high-grade gold results from grab samples taken at its SPJ Property, which once hosted a working gold mine in the 1980s.

The company is currently running a 2,000-metre drill program this fall to explore gold extensions in and around the former Scadding Mine.

“The system has the potential to host zones of gold, copper, cobalt, and nickel mineralization,” said company president Quentin Yarie in a statement, issued Nov. 13.

MacDonald Mines acquired the SPJ Property last April. Together with its other adjacent exploration properties, the company now controls 17,720 hectares, 20 kilometres east of the city.

Their stated intention is put the Scadding Mine back into production. Noted mine financier Eric Sprott recently delivered $1.5 million for MacDonald to do exploration.

Yarie said this year’s surface work at Scadding combined with exploration work in 2018 on their nearby Powerline and Jovan properties suggest the SPJ property may host an under-explored iron-oxide-copper-gold system extending for several kilometres.

The discovery of gold in the Lake Wahnapitae area dates back to the late 1880s. Gold on the property was found in the early 1970s which led to three small pits being mined in 1984 and a ramp being constructed in the late 1980s.

In bringing a new interpretation of the area’s geology, the company found in compiling old exploration records that there are places around the mine that have never been drilled, never mined, and there are zones stretching beyond the Scadding deposit that have the potential for significant mineral zones.

Besides its Sudbury properties, MacDonald Mines has a gold property northeast of Wawa, near Alamos’ Island Gold Mine, has a chromite, precious and base metal project in the Ring of Fire, and a silica project in Quebec.