The construction of an open-pit base metals mine near the shores of Lake Superior could be three years away at the earliest, said the Montana mining company that is developing it.
Jan 23, 2014 8:25 PM By: Ian Ross 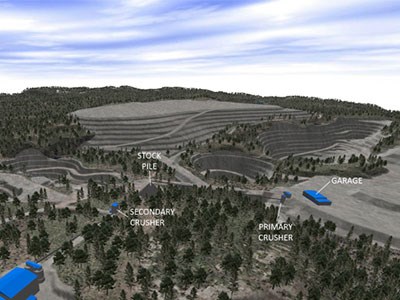 The construction of an open-pit base metals mine near the shores of Lake Superior could be three years away at the earliest, said the Montana mining company that is developing it.

The construction of an open-pit base metals mine near the shores of Lake Superior could be three years away at the earliest, said the Montana mining company that is developing it.

“It is unlikely we will do anything on this in the very near term,” Mick McMullen, president and CEO of Stillwater Mining Company, told industry analysts in a Jan. 21 conference call on its Marathon PGM (platinum group metals) project.

The Billings-based miner said Marathon is undergoing a strategic review as the company laid out a 2014 strategy that’s focussed on investing in proven assets that make money for shareholders.

If Marathon meets certain financial hurdles, McMullen said the best case scenario is that construction could begin “within the next three years,” subject to the issuance of permits.

Stillwater is simultaneously working through a feasibility study and an extensive federal-provincial environmental review of the project, 10 kilometres north of the town of Marathon.

With an 11.5-year mine life, the operation could potentially bring 400 construction jobs over an 18-24 month period followed by 350 mining jobs to a town of 4,000 that’s still recovering from the closure of its pulp mill in 2009.

Although platinum prices are on a tear and Stillwater is flush with cash – (US) $464 million in the bank -- the company is out to boost base metal production at its Montana mines and rein in spending on assets that don’t generate a strong payback to shareholders.

“We’re challenging all of our costs,” said McMullen. “We’re significantly reducing our costs that don’t directly impact our production of profitable PGM ounces.”

Stillwater is limiting spending at Marathon to between $5 million and $10 million this year once the feasibility study and permitting work is done.

McMullen said further capital will only be earmarked once the “project demonstrates suitable financial returns.”

“We are ranking all of our development…opportunities and each of those development opportunities must compete with each other for capital, and we will only commit capital if it generates a suitable return for shareholders.”

Marathon is one of its more advanced projects in the pipeline having acquired it from Marathon PGM Corp. in 2010. Stillwater later brought in Japan’s Mitsubishi as a 25 per cent partner.

McMullen told analysts the community of Marathon would like to see the mine built faster but that doesn’t factor into the “fairly long” permitting process.

A public hearing on the mine begins in Marathon on Feb. 18 under a special joint panel review which is part of the federal and provincial governments’ environmental assessment process.

With a total proven and provable mineral reserve of more than 91 million tonnes, the mine plan calls for a primary pit and satellite pits that will feed a 22,000 tonne-per-day mill.

Site construction would include building a 115-kV transmission line, a mine services complex with explosives storage, a fuel farm, a heavy equipment shop, a concrete plant and an assay lab.

Stillwater would draw on a local workforce but also recruit outside workers and house them in a proposed apartment complex in town with accommodations for 250.

McMullen said an updated mineral resource will be available once the feasibility study is done, likely within six months.

He added previous information released by the company indicates there’s been a “material reduction in grade from what had been assumed.”