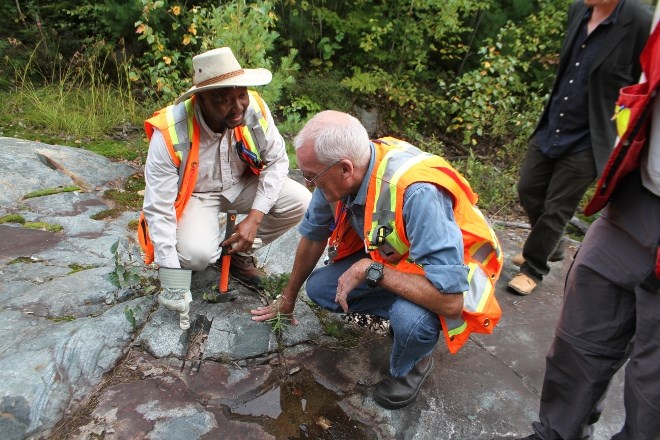 After crunching the numbers in an economic study, New Age Metals announced there’s enough palladium in the ground at its River Valley PGM project to support a large-scale mine for at least 14 years, creating 325 jobs in the process.

The Vancouver-based junior miner released a preliminary economic assessment (PEA) on June 27 of its property in Dana and Pardo Townships, 60 kilometres east of Sudbury.

On its 15,800-acre property, the company is proposing a $495-million bulk mining operation that would produce 119,000 ounces of palladium a year.

The main use of palladium is in the auto industry for catalytic convertors. Most of the world’s palladium supply is mined in South Africa and Russia.

Since first acquiring the property in 1998, New Age (formerly known as Pacific North West Capital) has been expanding and touting this project as the “largest undeveloped primary PGM resource in North America.”

Last summer, New Age hired a stable of consultants to design a scenario for an open pit operation, all the required surface infrastructure and tailings facility, as well as forecast the project economics, outline the metallurgical test work and processing aspects, and deliver an updated mineral resource estimate.

The company’s business case is predicated on a palladium base price of US$1,200 an ounce. As of June 25, palladium prices had surged to US$1,510.

In laying out their mining scenario, New Age’s plan is develop a series of 14 open pits, starting on the northwest corner of the deposit and progress in a southeasterly direction over a 16-kilometre mineralized strike length.

The complex would include a crusher and concentrator with the concentrated material trucked to Sudbury for smelting and refining.

In its release, New Age did not disclose if it has an agreement with either Vale or Glencore.

The last resource estimate at River Valley, released in January, show 2.9 million ounces of palladium equivalent (both measured and indicated) and 1.1 million ounces in the inferred category. The property also has occurrences of platinum, gold, copper, nickel, rhodium and cobalt.

Should New Age decide to proceed with a mine, a contractor will be hired to run the operation.

The operation, itself, would require a fleet of 221-tonne haul trucks, excavators and rotary drills, typically used in open-pit mining.

For the balance of this year, the company plans to do more exploration to grow the resource base, including a 5,000-metre diamond drill program on the north part of its property. Advanced geophysics in 2017 and 2018 identified nine targets, including its prospective Pine Zone.

They’re also searching for additional project financing and intend to secure a “strategic partner” to help with the development of the property.

In his spring/summer message to shareholders, New Age chairman-CEO Harry Barr said there were some “potential major partners” waiting in the wings, pending the results of the PEA.

Based on the long-range projections of available world supply and demand for PGMs, New Age is hoping major mining companies with diminishing reserves take a keen interest in junior miners with advanced projects as being attractive acquisition targets.

“Due to improved metal prices for PGMs, more specifically palladium and rhodium along with projected favourable supply and demand statistics in the base metals (nickel, copper, cobalt) sector, management believes that investor’s sentiment is beginning to change,” added Barr in his statement.

“Investors with interest in both the common shares of junior companies with advanced stage projects like River Valley and others who would purchase the physical metal themselves are beginning to take notice of these changing economic indicators.

“The long-term consensus for the palladium, rhodium, cobalt, copper, nickel and lithium markets continues to forecast a physical metal deficit. PGM demand is increasing with the cause of this attributed to significant supply risks from declining South African production combined with a growing demand picture.”

Besides River Valley, which is New Age’s flagship project, the company has a PGM-Rare Metals exploration project in Alaska and eight lithium-rare metals plays in southeastern Manitoba.