Not everyone in Sudbury is enamoured with smelters 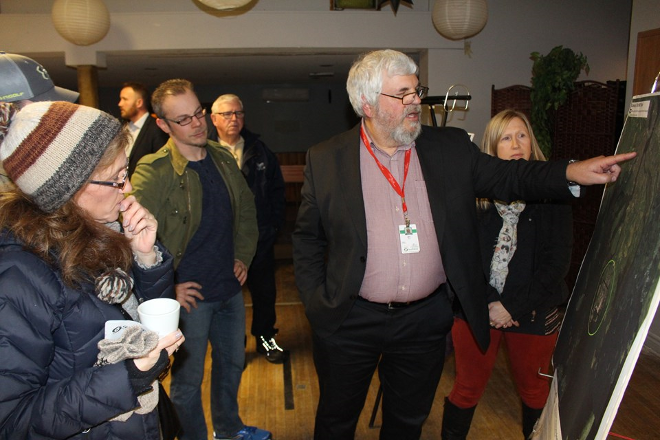 Director of economic development Ian Wood speaks to Coniston residents about the potential site of a ferrochrome smelter. (Matt Durnan/Sudbury.com)

A handful of more than 70 residents in the Sudbury bedroom community of Coniston gathered Feb. 7 to voice their displeasure with the city's move to throw its hat in the ring as a potential location for a ferrochrome smelter.

Noront Resources announced last week that Sudbury is one of four Northern Ontario cities vying to become the home of the $1-billion production facility, along with Sault Ste. Marie, Thunder Bay-Fort William First Nation, and Timmins.

Sudbury's bid identified Coniston as the preferred location, a decision that didn't sit well with a number of the town's residents who, for the most part, were in ardent disagreement with the idea of having another smelter in their hometown.

Vale (then INCO) shut down the Coniston smelter in January of 1972 due to environmental restrictions implemented by the provincial government.

Shouts of "you don't live in Coniston" and "we don't want to go back to the 1970s" were hurled at Coun. Deb McIntosh, who organized the meeting after Coniston resident Barb Deschamps phoned her with her concerns.

"It's the word 'ferrochromite' that scares me, it's the byproduct, it's the effluent that comes out of the smelter, we live on a watershed for the Wahnapitei River," said Deschamps. "A lot of these young families in Coniston, they're going to sell their homes and move."

Deschamps has started the website SaveConiston.ca and is petitioning against having a ferrochrome smelter built in the town she has called home for her entire life.

While the potential environmental and health hazards were a concern among those in attendance, Deschamps says the way that the city went about the process is what really raised red flags for her.

"Pretty much everyone I know found out about this last Thursday night (Feb. 1) and a day later it was proposed," said Deschamps.

"It's a small community and we all talk and there was no survey of residents about how we felt about this proposal, and to me that's a little bit underhanded and I'm feeling thrown under the bus."

McIntosh organized the meeting, but the bulk of the speaking on the city's part was done by Mayor Brian Bigger and director of economic development Ian Wood.

The pair each spoke about the smelter, with Bigger detailing his trip to Tornio, Finland where he toured the nation's Outokumpu smelter.

"We went to Finland to ensure that we had a good and knowledgeable and strong proposal and because we can see the benefits of all the additional jobs and the ecosystem that will build around it," said Bigger.

The mayor and his delegates spoke with the plant's designers, environmental experts, public health workers, and members of the community during their trip in January, and Bigger says that by and large, the response was a positive one.

"In speaking to dozens of people in the community, yes, we had assurances that this is the best technology in the world and that this process is safe, that in Finland they have modern technology and have advanced processes that are looking for the effects on public health and the environment," Bigger said.

"We were provided studies that had been done on all of the workers in that plant, and what I can say is in speaking to dozens of people there were absolutely no red flags."

Douglas Chabot was another Coniston resident who attended the meeting, and like Deschamps, said he was blindsided by the whole thing.

With regards to Bigger's comments about the safety of the plant, Chabot wasn't buying what the mayor was selling.

"When you start doing some research on chromite and ferrochrome, you start hearing about the chromium hexavalent (sic) and the causes for cancer and so many other problems that can lead to birth defects, lung problems and they're throwing Finland at us as a closed plant, but accidents happen," said Chabot.

"Are our standards the same as Finland's? You're not going to see an impact right away but when that child is growing up or they have children and they've been exposed to it ... Mayor Bigger had talked about the slag and using it for roads if that slag is crushed it releases the chromium hexavalent."

According to the Occupational Safety and Health Administration, breathing small amounts of hexavalent chromium, even for long time periods, does not cause respiratory tract irritation in most people.

Some employees of these plants can become allergic to hexavalent chromium so that inhaling chromate compounds can cause asthma symptoms such as wheezing and shortness of breath.

Wood explained how the city decided to put Coniston forward in their bid, while trying to allay some of the concerns of residents who may have felt the deal was already done.

"Nobody at the city level is able to say that this is a done deal and it's going ahead. There are many technical studies that will be undertaken, there are baseline studies in the environment, there will be expertise brought to bear in terms of what potential impacts could happen and what the company must do to avoid those impacts, and if they can't, then they won't get a permit."

This was the first community meeting on the matter of a ferrochrome smelter, and it appears that it won't be the last. Deschamps says she will be fighting this "tooth and nail."

McIntosh said she welcomes the questions and concerns of her constituents and that Coniston residents deserve answers, but hopes future meetings will be carried out in more of an open dialogue format, rather than the contentious and combative tone that was present.

"They are reacting to the word smelter and I feel the same way, let's ask questions, is there a safe way of doing this? Is there a way of mitigating concerns?" said McIntosh.

"We need to know those answers and that's why this is here, so people can ask questions ... to just have an adversarial back and forth is not fruitful."