By banding together, a group of small and medium-sized mining suppliers and service providers will have a big seat at Canada's largest mining convention.
Jan 27, 2015 7:45 PM By: Jonathan Migneault 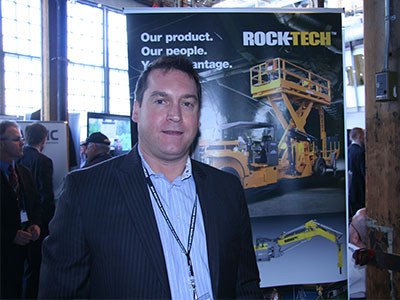 The inaugural Northern Ontario Mining Supply Showcase, in early 2014, featured 36 mining vendors and related organizations from Northern Ontario just outside the main space at the Developers Association of Canada convention. For 2015 the northern vendors will have space right on the convention floor.

By banding together, a group of small and medium-sized mining suppliers and service providers will have a big seat at Canada's largest mining convention.

The Northern Ontario Mining Supply Showcase, which features companies from across the region, has graduated to the largest pavilion at Toronto's Prospectors and Developers Association of Canada (PDAC) convention.

From March 1 to 4 the Northern showcase will occupy 6,000 square feet in the Metro Toronto Convention Centre.

Marla Tremblay, one of the showcase's organizers, said they hope to promote between 50 and 60 Northern companies at the convention.

When the Northern Ontario Mining Supply Showcase launched, during the 2014 convention, they had to set up shop across the street from the convention centre, at the Steam Whistle Brewery.

“We had no idea what to expect,” Tremblay said.

But the one-day event exceeded expectations, she said, and more than 1,000 convention-goers crossed the street to meet with the group of 36 Northern vendors.

“We've always thought that Northern Ontario is up there in terms of the best and brightest in mining supply,” Tremblay said. “This only stands to support that.”

St. Charles-based wastewater treatment company Canadian Shield Consultants Agency Inc. was one of the 36 vendors to participate in the unofficial showcase.

“We had been going to PDAC as a non-exhibitor for over 10 years,” said Gerry Dignard, the company's president.

Purchasing a booth at the convention proved to be too cost-prohibitive for his small company, he said.

But the Northern Ontario Mining Supply Showcase reduced that financial burden, and gave his company a chance to promote its services to a wide audience.

Dignard said he walked away from the convention with a couple of new contracts to provide wastewater treatment for gold miners.

Canadian Shield Consultants will return to the Northern Ontario Mining Supply Showcase in March, but this time the company will have a booth on the main convention floor.

“The industry is now acknowledging us because we were there,” Dignard said.