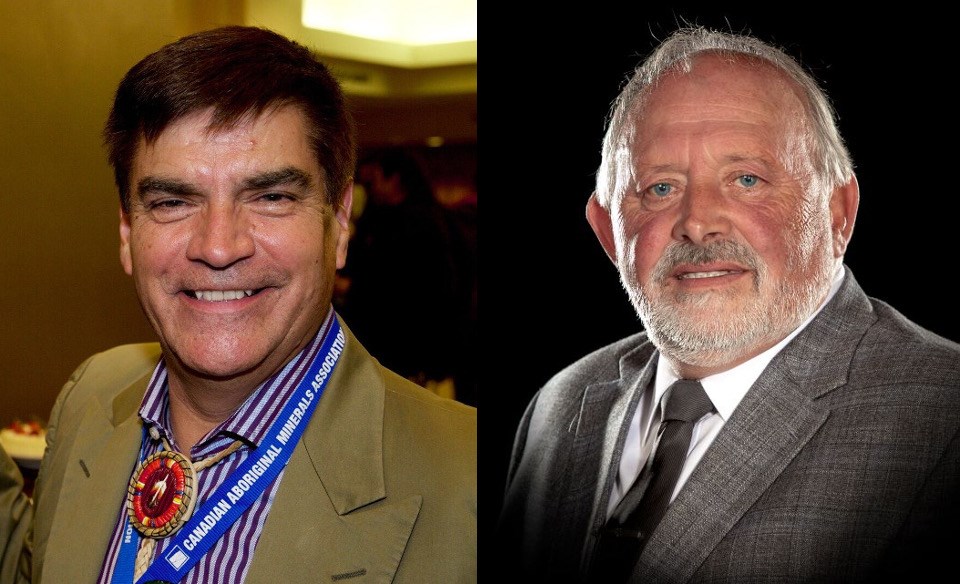 Geologist Hans Matthews (left) of the Wahnapitae First Nation and prospector Rudy Wahl of Marathon will receive awards from the Prospectors and Developers Association of Canada in March 2020. (Supplied photos)

A Northern Ontario prospector and a champion of Indigenous participation in mineral development are among the 2020 recipients of awards being handed out by Prospectors and Developers Association of Canada (PDAC).

PDAC announced the six recipients of its 2020 awards on Dec. 10.

Among them are Hans Matthews, a geologist and member of the Wahanpitae First Nation, located outside Sudbury. Matthews will receive the Skookum Jim Award, which recognizes an Indigenous leader in the field.

A founder and president of the Canadian Aboriginal Minerals Association, Matthews has been integral to helping Indigenous communities become partners in the mining sector.

As a trained geologist, Matthews has worked in the Red Lake camp for Interquest Resources and for the Aboriginal Workforce Participation Initiative for Indian and Northern Affairs Canada. He later worked for consulting firm PwC to facilitate agreements between mining companies and Indigenous Peoples for projects in Australia, Canada and South Africa.

He has served in additional roles including negotiating the participation agreement between the Glencore’s Nickel Rim South Mine in Sudbury and Wahnapitae First Nation.

“As the (CAMA’s) president, he has helped CAMA bring together industry and Indigenous leaders, government representatives and youth in a neutral setting to discuss resource management, youth engagement, and health and environmental protections,” PDAC noted.

“The organization has been pivotal in developing partnerships that provide training jobs and business opportunities to Indigenous peoples across Canada.

Joining him is Rudy Wahl of Marathon, a prospector and discoverer of several precious metal, diamond and rare earth occurrences in northwestern Ontario. Wahl will receive the Bill Dennis Award, which recognizes industry leaders who have made a significant mineral discovery, or made an important contribution to the prospecting and/or exploration industry.

Self-taught in mineral exploration, Wahl optioned more than 30 of his properties to companies eager to invest in further exploration. His discoveries represent a diverse range of commodities and deposit types, including gold, uranium, rare earth elements, diamonds and niobium.

In 2012, the Northwestern Ontario Prospectors Association (NWOPA) presented him with its Lifetime Achievement Award, noted PDAC. Three years later, he received NWOPA's Bernie Schneiders Discovery of the Year Award for his discovery of niobium-phosphate mineralization in the Prairie Creek carbonatite complex northwester of Marathon. In August 2019, Plato Gold acquired a 100 per cent interest in discovery, now called the Good Hope niobium project.

“For his exceptional accomplishments, he received an honorary doctorate degree in science from Lakehead University in Thunder Bay in 2017. A year later, he was elected to NWOPA's board of directors.”

Other awards and their recipients include: