Now in its third year, the Northern Ontario Mining Supply Showcase has become a staple at the annual Prospectors and Developers Association of Canada (PDAC) convention, occupying 7,800 square feet at the Metro Toronto Convention Centre.
Mar 10, 2016 3:04 PM By: Jonathan Migneault 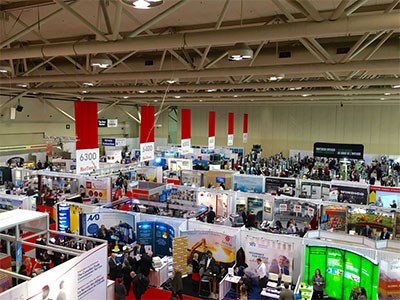 Now in its third year, the Northern Ontario Mining Supply Showcase has become a staple at the annual Prospectors and Developers Association of Canada (PDAC) convention, occupying 7,800 square feet at the Metro Toronto Convention Centre.

Now in its third year, the Northern Ontario Mining Supply Showcase has become a staple at the annual Prospectors and Developers Association of Canada (PDAC) convention, occupying 7,800 square feet at the Metro Toronto Convention Centre.

When the showcase launched in 2014, organizers could not get a spot at the convention centre, and had to set up at the Steam Whistle Brewery across the street.

“That was extremely successful, but we didn't have enough space,” said James Franks, the economic development officer for the City of Temiskaming Shores, who helped organize the first showcase.

That year 36 Northern Ontario vendors, representing mining suppliers from Thunder Bay to North Bay, participated in the showcase at the Steam Whistle Brewery.

The next year, 55 Northern companies participated in the showcase – this time inside the convention centre thanks to financial support from FedNor. It has expanded to 72 companies in 2016.

Franks said one big advantage from the showcase is that it gives northern mining suppliers a smaller barrier to entry.

The cost to rent a space at the Northern Ontario pavilion, for example, is much lower than going it alone on the main convention floor.

“Most of them couldn't afford to come to an event like this,” he said.

Jason Ploeger, a geophysicist with Canadian Exploration Services, said the company had its own booth for several years, but joined the northern showcase in 2015.

“We actually found it was an improvement to where we were in the south building,” he said. “We found we had less traffic, however the traffic was more targeted.”
The company was able to attract new customers last year, who were interested in forging business relationships in Northern Ontario.

Marty Warkentin, the owner of Northern Survey Supply, said his company has opted to have to booths – one at the main convention area and one with the Northern Ontario Showcase.

“When you're in the general booth area it's more of a global community,” Warkentin said.

While the Northern Ontario booth allows him to connect with customers closer to home.

The MOSS system, which stands for "miner operator survey system," allows underground miners to do their own surveying on the stop – to determine exactly which part of the rock face needs to be drilled and blasted – without the assistance of a surveyor.

While the mining industry has been in a cyclical downturn for the past few years, Warkentin said spirits were relatively high at the Northern Ontario showcase.

“Gold is certainly holding its own now, so that's a bit of a bright spot,” he said.