Norilsk, Russia is closer to Thunder Bay than one might think 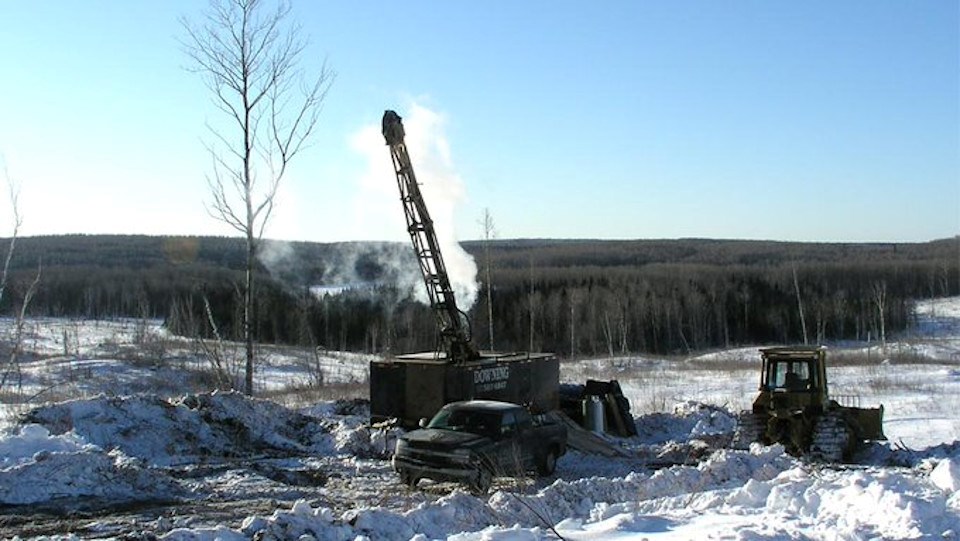 The proponents behind a plan to build a high-grade palladium mine north of Thunder Bay are pressing the reset button. But with good reason.

Exploration drilling by Clean Air Metals at its Thunder Bay North project recently hit massive sulfide material at one of its deposits, 40 kilometres north of the city.

In a recent news release, the Thunder Bay-based junior mining company is calling this a "potential gamechanger."

The company has been drawing comparisons between the geology of Thunder Bay North to that of Norilsk, a prolific mining area in Russia's High Arctic that's been in production for more than a century. It's considered one of the world's richest and most minerally well-endowed mining camps.

One short 0.5-metre drill intersection graded 7.93 per cent palladium, 6.41 per cent platinum with occurrences of copper, nickel and cobalt. The intersection showed 'loop-texture' massive sulfides, very similar to the geology of the deposits found in Norilsk.

Massive sulfides are considered as being at the top of the scale in terms of metallic minerals.

Clear Air CEO Abraham Drost has long believed Thunder Bay North belongs in the same geological family as Norilsk. This potential is what drew him to the project last year.

Norilsk is globally known as a producer of extremely high-grade copper, nickel and platinum group elements, including palladium.

"We're in a rarified group here," said Drost, in a recent Amvest Capital webcall to investors, in comparing Thunder Bay North against Norilsk and other global mining camps. "These are large, world-class type deposits."

Thunder Bay North is already a mine development-ready project.

Located a half-hour drive north of the city, the property contains two deposits, Current Lake and the Escape Lake. Collectively, they contain a total of 1.8 million ounces of indicated palladium, along with a substantial inferred base of additional 660,000 ounces.

Current Lake is the more advanced of the two, having had more exploration work done there over the past 12 years. With more than 1.3 million ounces of indicated palladium in the ground, at an average grade of 3.44 grams per tonne, there's enough material there to develop a mine on its own.

But the more intriguing prospect is Escape Lake. This emerging deposit contains only 505,369 ounces of indicated palladium. But it's underexplored and is the focus of the company's 2021 drilling program.

Clean Air Metals, formerly known as Regency Gold, has only been publicly traded since May 2020. Thunder Bay North is its flagship, formed when two separate exploration assets – Current Lake and Escape Lake – were amalgamated into one project.

The project is 40 kilometres north of the city of Thunder Bay and is on the road to Impala's Lac des Iles Mine, 60 kilometres to the northwest. Highway 527 crosses the western part of the property. A high-voltage 230-kilovolt power line crosses the southeast part.

Drost, a geoscientist, and executive chairman Jim Gallagher, the former mine manager at Lac des Iles, were recruited last spring to advance the project.

With 30,000 hectares of ground at their disposal, exploration is narrowed down to the Current and Escape deposits. Clean Air acquired the properties through an option agreement with Benton Resources. Panoramic Resources of Australia had been exploring at Current Lake while Rio Tinto Exploration was working at Escape Lake.

The two deposits are two and half kilometres apart and, although they are separate orebodies, Drost said they appear to be twin mineralized structures, geologically "joined at the hip" by the Escape Lake Fault.

As the Clean Air name suggests, Gallagher believes Thunder Bay North "covers all the bases" in providing the industrial metals needed to supply the clean and green energy technology revolution.

"Good suite of metals to be in at this point in history," he said.

The two deposits carry equal amounts of palladium and platinum. Palladium prices are at all-time high, hovering at the $2,500 per ounce range, while platinum is in the range of $1,225 per ounce.

Both metals are key elements used in gas and diesel catalytic converters that scrub toxic emissions from vehicle exhausts. Platinum is finding a new application in hydrogen fuel cell technology.

Also in the mineral mix at Thunder Bay North are copper, nickel, cobalt, gold and silver. But a real sweetener is the presence of rhodium.

It's an extremely rare platinum group metal that's suddenly in short supply, trading at US$25,000 an ounce. Rhodium is also used in automobile catalytic converters and other pollution control measures.

Although rhodium makes up less than one per cent of the resource – with 25,000 ounces of indicated material discovered so far – it amounts to about US$600 million, potentially a significant revenue generator for the mine.

In making a side-by-side geological comparison in the webcall, Drost called Thunder Bay North a "dead ringer" for Norilsk's Talnakh Field, which has been in continuous production since the 1920s with more orebodies still being discovered. The fault structure of Thunder Bay North and Talnakh are almost identical.

In the bigger picture, the Mid-Continent Rift system running underneath Lake Superior, which has spawned many recent and promising mineral discoveries on the north and south shores, offers a geological setting that's similar to the volcanic rock in the Siberan Traps in the area of Norilsk.

"We believe we're on the cusp of a potential significant discovery of massive sulfides on multiple fronts," said Drost.

Clean Air raised $11.5 million for a 40,000-metre diamond drill program now underway. The bulk of that work is directed at Escape Lake where two rigs are doing systematic step-out drilling from the existing resource base.

The drill results have given Gallagher pause for thought in wanting to press on with building a mine at this stage.

"I don't think we know what we have here," Gallagher said of Escape Lake's open-ended potential. The company is devoting 5,000 metres of this year's drill program to go looking for more massive sulfides on the property.

"As the mining guy, not the geologist, I see now that there is so much more potential here," he said. "You hate to build a mine and then discover you're sitting on a very different deposit than what you built it for."

Clean Air originally entertained the idea of carving out an open-pit mine at Current Lake, but has since abandoned that approach.

Drost thinks it's "almost impossible" to get a government permit these days to drain a lake in order to access a deposit. Moreover, such a move would be "unacceptable" to the area First Nations with whom they have a project support agreement.

The new approach is a ramp-accessed underground mine that will be a selective, high-grade operation. More than a million tonnes of mineralized material will be left in the ground to provide an adequate overhead buffer between the lake bottom and the mine.

The nearest high-grade zones are within 60 to 70 metres of surface.

A preliminary economic assessment for a mine at Current Lake is currently underway. A next-stage prefeasibility study is scheduled to start this fall, but that might be delayed, Gallagher said, pending the interpretation of further drill results.