The price of nickel could reach highs previously seen in 2007, said Mark Selby, president and CEO of Royal Nickel, at a Canadian Institute of Mining event in Sudbury , May 15. Selby expects nickel prices to $15 to $20 per pound by mid-2015.
May 16, 2014 6:34 PM By: Northern Ontario Business Staff 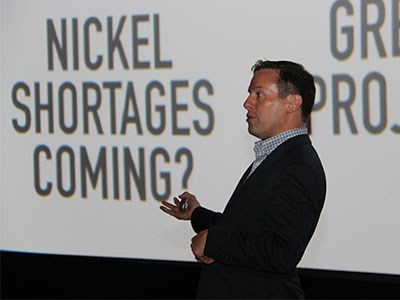 Royal Nickel president and CEO Mark Selby expects nickel prices to reach up to $20 per pound by mid-2015.

The price of nickel could reach highs previously seen in 2007, said Mark Selby, president and CEO of Royal Nickel, at a Canadian Institute of Mining event in Sudbury, May 15.

The reason is Indonesia's decision to cease nickel exports indefinitely. The Asian country contains 25 per cent of the world's nickel supply.

“To give you an idea of just how much that is, in the oil business that would be the equivalent of waking up Monday morning and finding out that Saudi Arabia, Iran, Iraq, Kuwait and all of the other Gulf states decided not to produce oil anymore,” Selby said.

The country has stopped exporting the metal to build the ore processing infrastructure needed to create more value from its nickel.

In 2009, when the Indonesian Parliament first discussed ceasing copper and nickel exports, nickel left the country with only 10 to 15 per cent of its end value.

“There's a massive amount of value to be captured by building these plants in the country,” Selby said.

In January 2014, just before Indonesia halted nickel exports, the metal sold for around $6 a pound. In mid-May, nickel prices were as high as $9.50 a pound.

But Selby made his announcement after a two-day stretch in which nickel prices fell 10 per cent. The closing price for nickel on Thursday, May 15, was $8.50 per pound.

Over the next few years, Selby said, the world will face a nickel shortage.

“The world will need more nickel and that should translate into much more demand for future supply growth from Sudbury,” he said. “The nickel prices have been so weak the past four or five years that it's made it difficult to think about expanding when the market was in oversupply. Now we're getting back into a long-term period of supply shortages, so that should be good for Sudbury.”

Royal Nickel plans to take advantage of that nickel shortage, and higher prices, with its upcoming Dumont Mine, just north of Rouyn-Noranda in northwestern Quebec.

Royal Nickel plans to begin production in 2016. The mine's first phase will extract 52,000 tonnes of ore per day, Selby said, and production will ramp up to 105,000 tonnes per day after five years.

By that point, Dumont will be Canada's second largest base metal operation.

The open-pit mine is expected to have an initial lifespan of more than 30 years, but could last several more decades once more reserves are reached, Selby said.