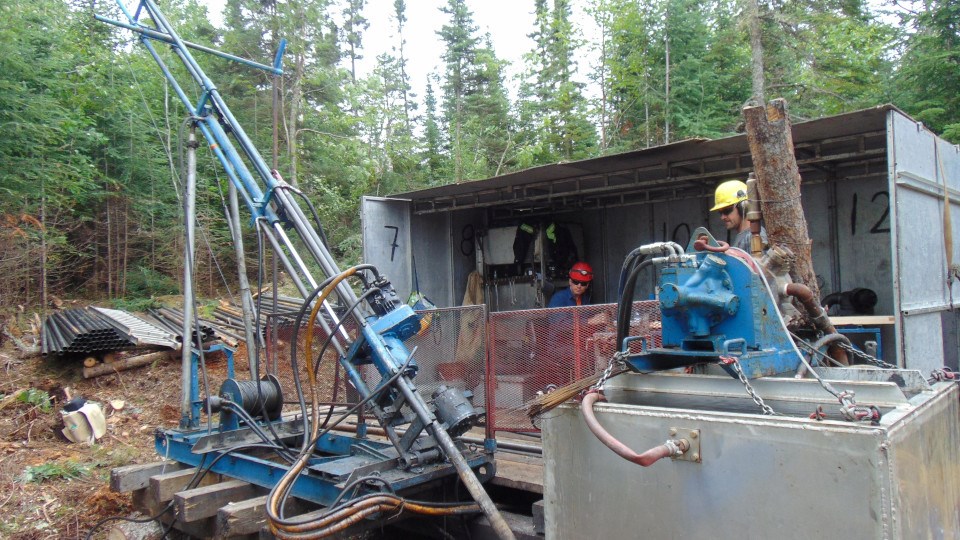 One company looking for nickel is reporting significant exploration success in the Hemlo area.

Palladium One said the first two holes of a drill program at its Tyko property encountered massive magmatic sulphides grading 8.7 per cent nickel (193 pounds per tonne) over 3.0 metres. The intersections were taken a depth of less than 30 metres.

The Toronto-based nickel and copper company makes no secret that they're out to find a high-grade nickel deposit at Tyko, a nickel, copper, platinum group metals property, 25 kilometres north of Barrick's Hemlo Mine Complex and 65 kilometres northeast of Marathon. It covers more than 20,000 hectares, a good chunk of which has see no geological mapping or exploration.

After finding nickel-mineralized boulders and soil samples at Tyko this year, the company began drilling off a target dubbed Smoke Lake in late November. All 13 holes hit multiple magnetic sulphides.

"This is the first discovery of massive sulphide mineralization at the Tyko Ni-Cu-PGE Project and provides significant encouragement for additional discoveries given Tyko is woefully underexplored."

The company said a bore hole electromagnetic survey will be completed this month to further outline the Smoke Lake massive sulphide body.

The gold-seeking junior miner took the wrapping off its provincial exploration permits, just in time to begin a drill program at its North Limb project this month.

The company has some drill targets lined up for a 10,000-metre program along the Armand Complex Trend. The company believes it geologically resembles the Moose Lake Volcanic Complex which spawned more than 21 million ounces of gold production since 1985 at Barrick's Hemlo Mine Complex.

In a Dec.17 news release, the company said the permits cover the majority of the claims for North Limb and all of the claims on their 24,000-hectare Pic Project, 30 kilometres northwest of the Williams Mine.

The company has built a new drill core logging facility in Manitouwadge and said it's working on developing geological models for its Hemlo West and Pic Projects.

“We are very fortunate to be working in the Hemlo camp and consider our package of about 38,000 hectares of claims to contain some of the most prospective geology in the area," said CEO Brian Howlett in a Dec. 17 statement.

"We are fully funded to compete the planned drilling campaign and look forward to getting started next month.”

Outside the town of Marathon, a company evaluating the economics of a potential open-pit mine has found a high-grade palladium zone that's beneath their already established deposit.

Generation Mining released the results of a 12-hole drill program that focused on a dipping extension of its palladium deposit.

The Marathon deposit is undergoing a feasibility study scheduled to be released sometime this quarter. Gen Mining has a massive 22,000-hectare land package around the town that has yet to be fully explored.

“Ending our 2020 exploration program with our best drill intercept of high grade PGM’s plus copper will make for an interesting exploration program in 2021, and with the recent financing, we now have the funds for this," said Gen Mining president-CEO Jamie Levy on Jan. 5.

On New Year's Eve, the company announced it had cashed up on the exploration side by raising $3.3 million in financing through a flow-through share offering.

Levy said they're topped up to more than $12 million in the bank, enough to carry out their technical and paperwork plans for the year.

“This financing will allow Generation Mining to follow up on the results of our 2020 exploration season, while continuing to work on our feasibility study and permitting in 2021.”