The forestry industry is rebounding on the north shore of Lake Superior. The mothballed Terrace Bay pulp mill has a new owner in the Aditya Birla Group of India. Birla is a multi-national Fortune 500 corporation with employees in 36 countries.
0
Sep 14, 2012 2:30 PM By: Ian Ross 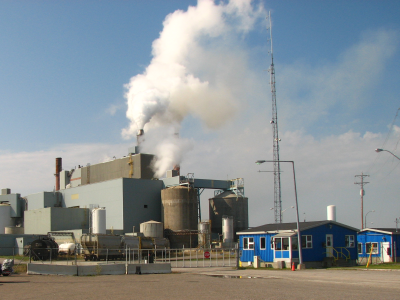 India's Birla Group purchased the former Terrace Bay pulp mill this summer for conversion into a pulp dissolving operation used for rayon products such as clothing and household items.

The forestry industry is rebounding on the north shore of Lake Superior.

The mothballed Terrace Bay pulp mill has a new owner in the Aditya Birla Group of India.

Birla is a multi-national Fortune 500 corporation with employees in 36 countries.

According to the Times of India, the purchase price was $300 million, but the report did not state whether it was U.S. or Canadian dollars.

With rayon manufacturing operations in India, Indonesia and Thailand, Birla is the world's largest maker of viscose staple fibre. Birla Viscoe is used in a wide variety of applications such as shirts, trousers, diapers, tissues, towels and bed linen.

“It's a transformational move in the forest sector and the first of its kind in Ontario,” said Thunder Bay-Superior North MPP Michael Gravelle, the province's natural resources minister.

The Birla Group and a Canadian subsidiary, the AV Group, operates two mills in New Brunswick and supplies markets with specialty pulp products to service the textile and paper industry.

The Terrace Bay property was under creditor protection with Ernst & Young as its court-appointed monitor.

The mill was run by the Buchanan Group of Thunder Bay, which purchased the operation from Neenah Paper in 2006. It has a paper grade pulp capacity of 285,000 tonnes.

Terrace Bay has not operated since an explosion last October killed one employee, but plant improvements were made under Ottawa's Green Transformation Program to attract a buyer.

As soon as the purchase agreement was finalized in late June, the company immediately began work in making $250 million in renovations to convert the mill into a pulp-dissolving operation. A new five-year labour agreement was reached with employees.

“The company are the customers because they need it for the production of uniforms and material for clothing,” said Gravelle. “This gives us a sense of long-term sustainability for the operation that we haven't seen before.”

Under the Birla flag, the operation will provide a minimum of 275 mill jobs, 335 woodland jobs, and offer employment in countless support positions.

Among the many proposals for the property that came forward, Gravelle said the Birla Group made the best case of the mill's long-term viability and operation.

“A large investment by a global company is something that we are excited about as a province.”

The former Marathon Pulp mill is the next good news story on the horizon.

A prospective new owner is an Illinois-based development company specializing in buying and repurposing brownfield sites across North America.

Although no announcement has been made by the company or the Ontario government, the Green Investment Group Inc. (GIGI) was the leading candidate to close the deal on the 1,300-acre mill property.

The company, based just east of St. Louis, in Alton, Ill., was founded and is co-owned by Ray Stillwell, a Midwestern lawyer, and Mark Spizzo, a former economic development officer for the State of Illinois.

“Due to confidentiality agreements in place, we are unable to comment at this time,” said Stillwell by email, who was in Marathon this past summer.

Established in 2005, GIGI does makeovers on abandoned industrial sites, then attracts a host of synergistic companies. Its first project was the Alton Steel redevelopment in its hometown.

The company's website lists seven of its properties, including two in Quebec and one in New Brunswick.

The wood fibre basket on the north shore will also be running under a different system next year.

Ontario has the established its first, and much-anticipated, Local Forest Management Corporation (LFMC).

The Nawiinginokiima Forest Management Corporation (Ojibway for working together) is a new government agency assigned to manage and oversee the sale of timber. It is one of two pilot programs previously announced by the province to test a new forest tenure management system. Lac Seul First Nation, near Sioux Lookout, was recently announced to be getting an Enhanced Shareholder Sustainable Forest Licence.

Gravelle said he's committed to seeing the corporation operating by next April and plans to put some startup venture capital in place.

“We want to provide loans to the LFMC to move into an operational position. In order for them to have a real change of succeeding, they need to access loans, and we will be in a position to do that.”

An interim board is currently in place to select a general manager and eventually select a more permanent board of directors.