A dearth of prospectors in the mining industry could impact the ability to get new developments up and running if more aren’t recruited to the profession.
Feb 22, 2016 4:27 PM By: Lindsay Kelly 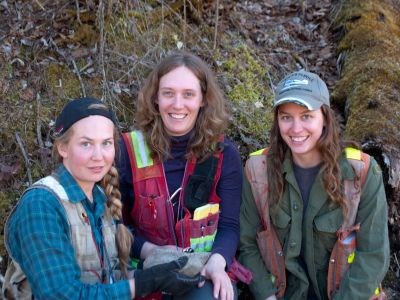 Ruth, Jessica and Veronique Bjorkman are sisters and prospectors with Bjorkman Prospecting, founded by their father, Karl, in the 1990s.

A dearth of prospectors in the mining industry could impact the ability to get new developments up and running if more aren’t recruited to the profession.

Jessica Bjorkman, a prospector with Bjorkman Prospecting, made the observation during a talk before members of the Sudbury Prospectors and Developers Association on Feb. 16.

“I think we’re going to see a gap in new discoveries and mines, I think directly related to a lack of prospectors and a lack of boots-on-the-ground explorers,” Bjorkman said. “So, hopefully we can get more people hooked on prospecting and hopefully get more geology students out prospecting.”

Bjorkman Prospecting is a family enterprise based in Whiskey Jack Lake, outside Atikokan, which was started by Karl Bjorkman in the 1990s. Jessica and her five siblings are all involved in the industry.

Last year, Jessica and her sisters Veronique and Ruth were named Tradeswomen of the Year by the Influential Women of Northern Ontario (a Northern Ontario Business event), and this spring, the Bjorkman family will receive a Special Achievement Award from the Prospectors and Developers Association of Canada during its annual convention in Toronto.

Prospecting — the first stage of mineral extraction that involves an on-the-ground search for rock mineralization — remains a misunderstood profession that comes with a built-in lack of understanding by a general public that’s unfamiliar with the mining process, Bjorkman said.

Stereotypes and misconceptions persist, and Bjorkman has heard them all: any geologist can be a prospector, all the good mineralization has been found and it’s pointless to keep looking, prospectors are failed geologists who couldn’t hack it in school.

“We’re in an era that elevates university and college education to the point that it’s looked down upon if you don’t go and get an education,” said Bjorkman, who learned the trade from her father. “Or, if you did get an education, therefore it’s assumed that you’re going to be able to do prospecting.”

Bjorkman argues that more geology students would benefit from fieldwork that educates them in the techniques and methods for successful boots-on-the-ground mineral discovery. Prospecting is an integral part of the mining cycle and requires a special set of skills, she said.

Prospectors tend to love the wilderness and have a passion for adventure; they have a strong work ethic and are good navigators, she noted. They’re honest and methodic in their sampling techniques, and they’re often experts about their local area, which makes them a good resource for establishing relationships with local landowners or accessing services, Bjorkman said.

But above all, prospectors are defined by their passion for interesting geology, a kind of “gold fever” that propels them to continue searching for the next big mineral discovery.

“I believe it’s truly an art to find rock with economic mineral potential,” Bjorkman said. “I find you can teach someone all you want, but to have the art to actually find the rock is just something very rare and not many people have it.”

And there’s a definite shortage of prospectors in the industry. The current crop is retiring, and there are few younger recruits to take their place, Bjorkman said. Companies tend to default to drilling to find new outcrops, and there’s a general lack of knowledge about prospecting, even within the industry.

“With that low exposure, people who could be potential recruits don’t even know this job exists,” Bjorkman said.

She advocates for educating students about prospecting and training them in the field. And because so few young people are willing to battle the bush, the bugs and the inclement weather that prospectors often face, Bjorkman suggests companies should invest in those young people who show an interest in and aptitude for the profession.

Confidence, a strong will, self-motivation, curiosity, an appetite to learn, a good attitude and, of course, gold fever are all characteristics of a good future prospector, Bjorkman said.

The mining industry could benefit from recognizing and valuing the role of prospectors in the mining cycle, she said.

“It’s not just about someone losing their wage; we’re losing a really important part of the whole cycle,” Bjorkman said. “We want to make sure that’s there for future generations, because I think it really is important in the grand scheme of things.”