Somewhere in Greenland, there’s a mining industry representative walking around wearing a toque with Larabie Logistics emblazoned across it.
Apr 29, 2015 6:14 PM By: Lindsay Kelly 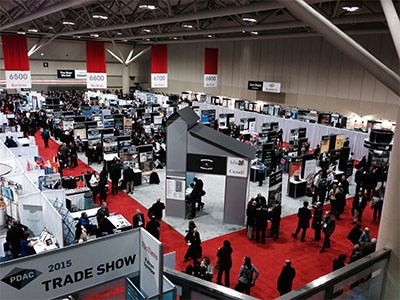 More than 60 Northern Ontario businesses participated in the Northern Ontario Showcase during the 2015 conference hosted by the Prospectors and Developers Association of Canada from March 1 to 4 in Toronto.

Somewhere in Greenland, there’s a mining industry representative walking around wearing a toque with Larabie Logistics emblazoned across it.

With temperatures still dipping below zero in early March, the giveaways handed out by the Kapuskasing-based hauling company proved just the right tool to attract visitors to its booth during the 2015 Prospectors and Developers Association of Canada (PDAC) trade show in Toronto.

Now, president Denis Larabie is hopeful the next time that mining rep needs help hauling materials and goods in North America, he’ll remember the toque, and the ensuing conversation, and consider Larabie
Logistics.

“We’re a small company, so we’re not a 3,000-truck company,” he said. “We don’t have the marketing bucks and we don’t have the exposure or the PR of these people, or the connections.”

But he does have the know-how and experience: Larabie Logistics worked on the $2.3-billion Lower Mattagami hydroelectric project, completed earlier this year, as part of a joint venture with Cree Carriers JV, and was the exclusive logistics provider during the development of De Beers’ $1.3-billion Victor diamond mine, completed in 2008, in another joint venture project with Creewest Logistics.

For Larabie, a first-time PDAC attendee, the opportunities to create new contacts were invaluable.

“It was mind-boggling the mining companies that were there with all their booths and promotional stuff,” he said. “It was very, very impressive for me.”

Brenda Hagerty has been attending PDAC for 15 years, but with booth space in such demand, she’s only ever had the
opportunity to walk the floor.

This year, for the first time, Hagerty was able to secure a booth for Porcupine Canvas after PDAC opened up the north building of the facility to new exhibitors as part of the Northern Ontario Mining Supply Showcase.

“It’s a good thing we got in there year one, because the north building is full,” she said. “There are no more booths left; people are back on a waiting list.”

Participation this year definitely paid off for Porcupine Canvas, which makes canvas tents, bags and cases geared toward the mining industry from its manufacturing facility in Timmins.

Tents and teepees drew the interest of Aboriginal visitors and resulted in direct points of sale for the company, but Hagerty, the company’s general manager, was also able to set up a distributor in British Columbia — a market that Porcupine had not yet tapped.

Hagerty also established contact with a representative from Peru, who’s interested in becoming a distributor in that country,
which is currently enjoying a mining boom.

Just those two were huge: getting a distributors in B.C. and Peru,” Hagerty said. “You kind of felt the vibe that some of the juniors got a little bit of money, so the vibe was a little bit better than in years past. Let’s hope that the market is starting to turn around.”

Christine Heavens is a PDAC veteran of sorts; as executive director of the Community, Business Development and Employment Services division at Northern College, 2015 marks the fifth year she’s brought a contingent to the convention.

“Those partnerships could involve, for example, offering underground hardrock miner or surface diamond driller common core at one of their locations anywhere around the world,” Heavens said.

This year, the Timmins school met with representatives from Northern Ireland, who were familiar with the quality of Northern’s curriculum and spoke about their needs for underground hardrock miner training as well as work training, Heavens said.

“Although they have to meet Ireland’s requirements for training, they also want to make sure that Ontario’s requirements are included as well, because they know Ontario is a leader in the mining industry and safety means a lot,” she said.

Northern additionally met with one of its partners from Arviat, Nunavut, with whom the school already works, while a teaching institution in Ecuador expressed interest in taking on some of Northern’s curriculum and training in response to the mining boom there.

Heavens noted that a lot of followup conversations typically need to happen before any agreements are put into place, but she’s hopeful that Northern can be working with some of these potential partners in a year’s time.

Denis Larabie’s connection to Greenland wasn’t just a courtesy call. Larabie spoke with one person who coordinates large-scale logistics from Europe to North America using cargo ships and Hercules aircraft, and is potentially looking for someone to take over the hauling for North America, which could mean a prospective partnership for Larabie.

As his involvement in larger projects wind sdown, leads like the one from Greenland are essential to expanding his client base.

“I believe the economy is not great in the mining business, because we’re in a low part,” Larabie said. “But I believe, with the exposure we had and with our names out there, it at least gives me more leads to expand the horizons of where we can go.”