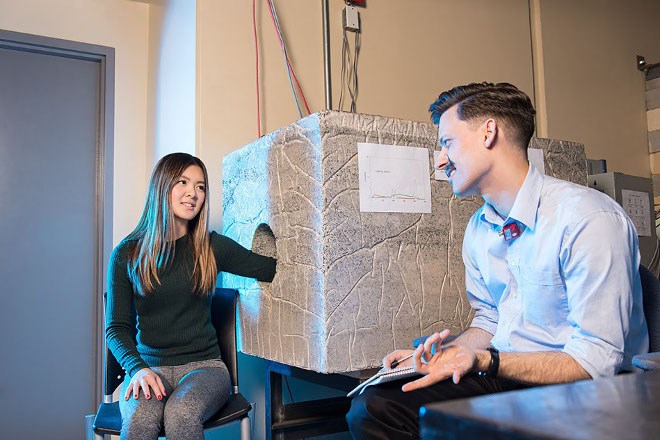 A highly specialized lab at McMaster University can take in vivo measurements of toxic elements such as aluminum. Researchers hope to use this system to provide further answers about the health impacts of miners exposed to McIntyre Powder aluminum dust. (McMaster photo)

The first group of underground miners from Timmins have undergone testing at McMaster University to determine the levels of aluminum in their bones.

A group travelled to Hamilton on Oct. 22 as part of the ongoing research into McIntyre Powder and the impact it may have had on miners exposed to the aluminum dust during their work underground.

McMaster University is home to a specialized lab that can take measurements of biological entities ‘in vivo,’ which looks at whole, living organisms as opposed to using a sample of dead tissue for testing.

The study was first conceived in Vancouver in March, 2017, during the 12th Keele Meeting on Aluminum, a biennial symposium that draws scientific researchers from around the globe to talk about aluminum research.

There, Janice Martell, a workers’ advocate who started the McIntyre Powder Project in 2015, connected with Dr. Fiona McNeill, a researcher whose work specializes in measuring exposure to toxic elements such as fluorine, aluminum, gadolinium, lead, arsenic and chromium.

“We know that aluminum in the blood stream causes serious neurological disease,” McNeill, director of McMaster’s Radiation Sciences Graduate Program, said in 2017 as the partnership was getting underway.

“The question we need to answer is how much of the aluminum in the powder moved from the lungs of those miners to the blood, which is hard to measure.”

The in-vivo study could provide insight into whether there is still aluminum in the bones of exposed miners and whether their levels are elevated as compared to those of the general population.

Subsequent groups of miners are expected to make the trip to be tested. Results from the testing will follow.

This most recent research into the impact of McIntyre Powder comes following a recently published report, led by Laurentian University researcher Dr. Andrew Zarnke, which looks at the composition of the aluminum dust.