Ontario Mine Rescue stood anxiously on the sidelines during the fatal Elliot Lake mall collapse , but it may prove to be a watershed event in the history and evolution of the 86-year-old volunteer organization.
Mar 24, 2014 1:47 PM By: Ian Ross 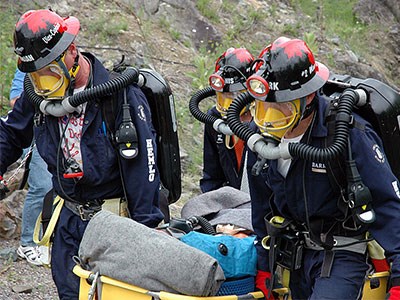 Ontario Mine Rescue is in discussions with Toronto’s Heavy Urban Search and Rescue about joint training exercises this year.

Ontario Mine Rescue stood anxiously on the sidelines during the fatal Elliot Lake mall collapse, but it may prove to be a watershed event in the history and evolution of the 86-year-old volunteer organization.

In the investigative aftermath, a new relationship has sprung up between the Sudbury-based Mine Rescue and Toronto’s Heavy Urban Search and Rescue (HUSAR) Task Force that was deployed to the Algo Centre Mall when the rooftop parking lot collapsed in 2012, killing two.

“I think it’s going to transform and reshape things,” said Alex Gryska, director for Mine Rescue.

No formal mutual aid agreement has ever existed between them, but that could all change in the coming months.

The two organizations have met regularly since the conclusion of the Elliot Lake Inquiry’s testimony phase to talk about joint training exercises sometime this year.
“We need to know the nature of how we (each) operate,” said Gryska.

“We’re looking at collaboration, working together on sharing information, finding out where our areas of commonality are, and in the event something like that happens in the future, how can we work to help one another out?”

The first phase of the Elliot Lake Inquiry last year examined the cause of the building’s collapse and the emergency response.

Many Elliot Lake residents in the former uranium mining town were outraged over the HUSAR team’s handling of the rescue and recovery of the two bodies from the mall’s rubble, and their neglect in calling Mine Rescue professionals from Sudbury, two hours away.

Mine Rescue is a network of 875 highly-trained and respected volunteer miners stationed at 40 underground mines across Ontario, including about 200 more at various open pit operations.

Formed in 1928 after the Hollinger Consolidated Gold Mine fire killed three dozen Timmins miners, the organization boasts a stellar international reputation for safety and high standards of training. No volunteer rescuer has ever been killed and no endangered miner has ever been left below ground.

On average, Mine Rescue operators respond to about three calls a month, mostly underground fires from electrical systems or mobile equipment. The network is coordinated out of Sudbury under the Workplace Safety North umbrella.

During the weekend of the mall’s collapse, Gryska was away at camp and arrived at work Monday morning unaware of what had transpired. The office was buzzing; phone calls and emails were pouring in from Vale and Goldcorp, which were ready to render aid.

“Typically we don’t respond to collapsed buildings,” said Gryska, but the pressure was clearly on internally to do something.

Mine Rescue never received a call for aid, so offers were made through the mayor’s office and the Ministry of Labour to send rescue officers experienced in underground collapses.

“Truthfully, I don’t if we could have done something,” he said. “Without having our people there, I really don’t know.”
Later, upon viewing photographs and receiving a technical briefing of the unstable conditions inside the mall, Gryska, who trained as a mining engineering technologist, sympathized with the HUSAR team.

“There wouldn’t have been any harm in being part of that group that does the assessment. But I don’t know what I don’t know.”

During testimony, HUSAR commander Bill Neadles ruled out calling in Mine Rescue, believing they didn’t have the capabilities to work in that environment. He admitted he knew little about them.

The two organizations aren’t totally foreign to one another, having teamed up when a 2011 tornado flattened buildings at the Sifto Salt Mine in Goderich, killing one employee.

Gryska, who testified about his organization’s capabilities, was invited to Ottawa to participate in Commissioner Paul Belanger’s roundtable discussions to get input from design, building, engineering and emergency professionals for his upcoming report.

Mine Rescue and its member companies have historically made offers to send rescuers and equipment to disasters spots, from the 1985 Mexico City earthquake to the 2011 Japanese tsunami.

“We‘ve always been there to help out any way that we can,” said Gryska.

Volunteers pride themselves on fast response times, usually being on the scene within 30 minutes of a reported mine incident.

Should there be a massive disaster where local first responders are overwhelmed, these trained personnel, stationed at mines across Ontario, bring with them a toolbox of thermal imaging devices, inflatable air bags, drills, rock splitters, plus heavy equipment from the mines.

“Potentially, if something happens, we’re there and available,” said Gryska.

Though structured to be a self-sustaining organization, Mine Rescue will inevitably change through partnerships, he said.

Some jurisdictional issues have to be worked out on command and control if Mine Rescue personnel are deployed off-site.

“We know our own capabilities,” said Gryska. “When there’s a mine emergency we know how things unfold. How would it unfold if it’s a non-mine site? There are some really difficult decisions that need to be made.”

As secretary-treasurer of the International Mines Rescue Body, Gryska has travelled and rubbed shoulders with numerous other groups, including from China and Russia, which are reshaping their services to model that of Ontario’s.

He brought them out to the mines to interview volunteers who told personal stories about a relative or friend that was trapped, injured or killed, and they wanted to make a difference.

“That’s the one question they were asking, why do you do it, why put yourself in harm’s way voluntarily?” said Gryska. “You’re doing it for the right reasons.”