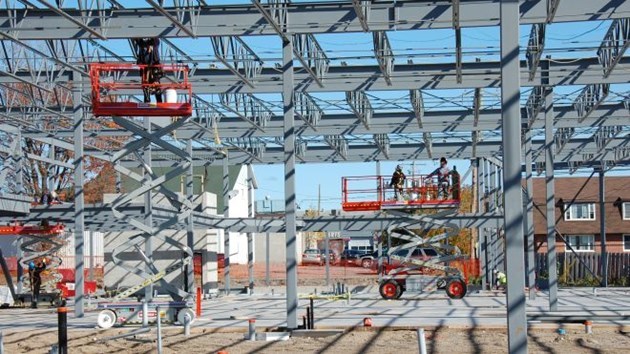 Ontarians have been legally allowed to smoke cannabis anywhere they’d smoke a cigarette for a couple months now, but that doesn’t mean they can light up any time.

This is especially true if they’re on – or about to be on – the clock.

But as cannabis joins alcohol on the list of legal psychoactive substances across Canada, employers are wondering what their rights are when it comes to restricting cannabis use in their workplaces, while safety and legal experts are reassuring them they have tools to do so.

Legalization has been of particular concern in Northern Ontario, largely due to the higher number of safety-sensitive jobs, and because, according to the Sudbury Community Foundation's "Vital Signs" report, the region has higher substance use rates too.

“What we’re hearing across all sectors in this industry is very much a significant concern about how we’re going to deal with this on the job site,” said Clive Thurston, president of the Ontario General Contractors Association (OGCA).

Thurston said a high rate of fatalities on construction sites can be blamed on impairment, and he thinks cannabis will only add to the struggle to manage impairment onsite.

According to legal experts, the best way is by developing rigorous fit-for duty policies that explicitly set out a stance on cannabis.

“Just because something’s legal doesn’t mean you have to allow it in your workplace if you have a justifiable reason for not allowing it,” explained Toronto lawyer Kelsey Orth, who’s been educating employers across the province on their rights.

“A lot of places have a zero tolerance policy in respect to alcohol consumption. One of the things that we’re seeing, and that we’re advising our clients is, instead of focusing on the drug or substance that’s causing the impairment, focus their policy on a fitness-for-duty standard."

That’s what they’ve done at Vale’s Sudbury mining operations, where Keith Hanson is the occupational health and disability management lead. They’re advising employees to refrain from cannabis use for at least 24 hours before coming to work.

“We updated our alcohol and drug policy because marijuana is no longer an illicit substance. It jumped out of that category into another category.”

But Hanson emphasized that their views on the safety of cannabis haven’t necessarily changed following decriminalization.

“What we see in these conversations are that with the social acceptance and with the legalization of it is, ‘Well, it’s the same as cigarettes,’ but it’s not. I think people are underestimating the risks, especially when it comes to safety-sensitive industries.”

Hanson said his and Vale’s concerns extend beyond the immediate workplace and to employees’ general mental health.

Cannabis has been linked to negative mental health outcomes, including psychosis and anxiety. While it may be tempting to compare cannabis to alcohol, there are key differences between the two substances.

“Although we treat it like alcohol in terms of rules, it’s not the same as alcohol,” said Hanson.

“It comes out of your system slower because it’s a fat soluble drug. Some of the cognitive things around memory – when you’re driving a piece of equipment, operating furnaces and things like that, in a safety-sensitive workplace, those things are concerns.”

Others are focused on the lack of data at this time on cannabis, compared to data available for alcohol. “The fact of the matter is there’s still a bit of grey area,” said John Levesque, director of education and information services at Workplace Safety North.

“Some of the research into the length of impairment from cannabis versus, say, alcohol – and how to properly road test people for cannabis consumption – some of these things are still being worked out as we speak.”

Even if reliable testing methods were made available, Thurston said it’s unlikely his members would be able to use them effectively.

“What we feel is needed there is open honest discussion on the issue of testing, how could it be implemented,” he said, “but unions won’t come to the table.”

He’d like to see construction being added to the provincial list of safety-sensitive industries that already includes mining, oil and gas, and driving. It would put an obligation on employees to show up fit for work.

Thurston also stressed that he’s worried the method – or rather methods – of consuming cannabis make it harder to tell when people are using it at work. Cannabis can be smoked, vaped, eaten, or even taken in a capsule or under the tongue as a tincture.

In terms of prevention, employers can technically require employees to disclose if they have an addiction, but oftentimes employers only find out after there has been a workplace incident and it’s too late.

It’s still early to see any trends when it comes to official challenges to workplace policies on cannabis, but in the coming months, Orth expects pushback when it comes to policies that include a duty for employees to disclose any substances they are currently using.

He also anticipates tension between contractors and clients when their policies differ. From what he sees, Levesque anticipates challenges from those using cannabis for medical purposes.

For now, both Orth and Levesque advise employers to focus on communicating the risks of cannabis use to employees, and state clearly in their policy that employees are expected to show up to work unimpaired.

“It comes down to the impairment … and it comes down to preventing it,” said Orth. “From an employer perspective, you have an obligation to provide a safe workspace to all your employees.”