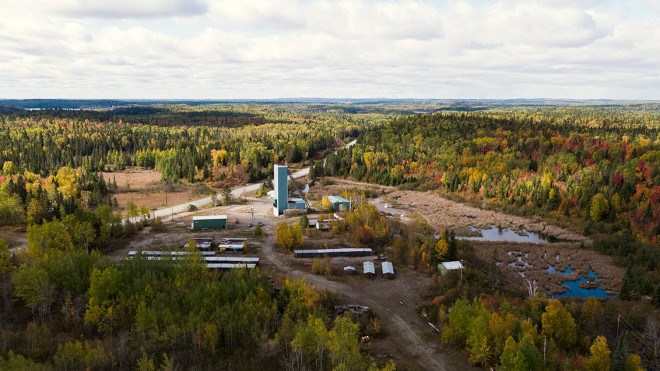 The former Cheminis Mine near Larder Lake.

Success at finding gold at Larder Lake has spurred Gatling Exploration to expand its drilling program to 20,000 metres.

The Vancouver-based junior miner announced it’s doubling the scale of its summer campaign with an additional 10,000 metres planned at its Larder Gold Project.

The company has a 3,370-hectare property situated two kilometres north of the community of Larder Lake and 35 kilometres east of Kirkland Lake.

Situated in McVittie and McGarry Townships, the Larder project hosts three high-grade gold deposits in the Bear, Fernland and the former Cheminis Mine, the latter with a vertical shaft of 1,085 feet.

The property is located in the Cadillac-Larder Break, a prolific gold belt in northeastern Ontario that's home to several world-class gold deposits.

In an Aug. 13 news release, Gatling said the enlarged program- will focus on expanding those deposits and targeting new high-grade targets at its recently acquired Kir Vit property.

Two drill rigs are deployed on the property with one exploring the Bear and Cheminis deposits and the other on the Kir Vit zone.

The company reported that the first six holes drilled at the Bear deposit all intersected high-grade gold mineralization and extended the gold zone to the west towards the Cheminis. Assays are pending.

Gatling is a project-specific spinoff company of Bonterra Resources created last September when Bonterra acquired a package of properties from Metanor Resources.

Gatling considers these three deposits to be part of one large mineralized system along the Cadillac-Larder Break.

“The goal of our initial 10,000-metre program at the Larder Gold Project was to confirm historical high-grade lenses and expand the footprint of the existing deposits,” said Nathan Tribble, vice-president of exploration in the news release.

“We are very pleased with our success so far and have doubled the program to a total of 20,000 metres. The expanded program will also include drill testing a number of attractive high-grade gold targets on our newly acquired Kir Vit property.”