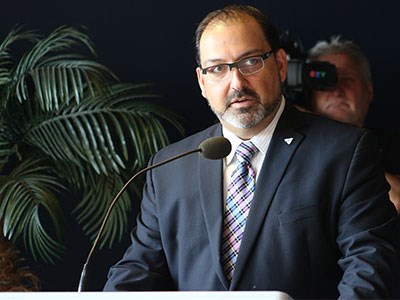 Sudbury MPP Glenn Thibeault made the announcement in Sudbury while Northern Development and Mines Minister Michael Gravelle held a press conference on the issue in Thunder Bay on April 17.

“Many of the major industries have been talking to me about the importance of this program,” Thibeault said.

Ontario is committing to an ongoing program, beyond March 2016, with continued investment of up to $120 million per year. The government will also undertake a review on the efficiency and effectiveness of the program and options for a sustainable approach.

The Northern Industrial Electricity Rate Program was introduced as a three-year program in 2010, and was extended in 2012, for qualifying Northern industrial customers.

It aims to offset higher energy costs in the North due to climate and distance to markets.

The program allows Northern Ontario’s large industrial electricity consumers to receive a rebate of two cents per kilowatt- hour with individual rebates up to $20 million per year, per company.

Currently, there are 16 Northern Ontario industrial companies representing 23 facilities participating in the program. On average, industrial electricity prices may be reduced by up to 25 per cent through the program.

To date, the Northern Industrial Electricity Rate Program has disbursed more than $546 million.

“Industry feedback from the program has been extremely positive within our region. For industries that continue to face high energy costs, the NIER program helps to lower these costs while maintaining global competitiveness and helping to sustain local jobs,” said Kapuskasing Mayor Alan Spacek, president of the Federation of Northern Ontario Municipalities, in a
press release.

The company spends around $500 million a year to run its Sudbury operations, he said, and hydro represents the second highest cost, after labour.

Boissonneault said the program is one of the puzzle pieces that will determine the company’s future in Sudbury beyond 2020 when its current mining operations are expected to end.

Hydro rates, along with metal prices and other factors, will help the company determine if that investment will be worthwhile.

“What’s important to us is to be competitive globally,” Boissonneault said, referring to local industrial hydro rates. “The answer has been yes, there are some (jurisdictions) that have an advantage over us, but we have been competitive in that regard.”

Glencore has two projects in the feasibility stages that would extend its mining presence in Sudbury to the mid-2030s, Boissonneault said.

The Onaping Depth mine, located in the company’s Levack complex, would descend up to 9,000 feet in depth, while the Nickel Rim Depth project, would extend the current mine by around 3,000 feet in depth.

“We believe it’s a natural progression from where we are now,” Boissonneault said.