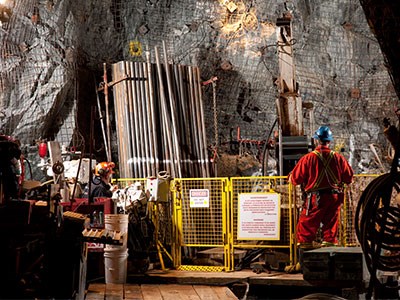 South African base metal heavyweight Impala Platinum Holdings (Implats) has made its move on northwestern Ontario miner North American Palladium (NAP) on a proposed share and cash deal worth $1 billion.

An Oct. 3 news release said the deal has met the unanimously approval from the board of directors of NAP and Implats.

The northwestern Ontario mid-tier also has several promising exploration projects and it continues drilling on its extensive acreage.

In favouring the proposed acquisition, NAP’s board of directors calls it “fair from a financial point of view” that’s in the best interest of the company and its shareholders.

“This transaction delivers attractive value for our shareholders and reflects five years of hard work we have devoted to realize the potential of our assets,” said NAP president-CEO Jim Gallagher in a statement.

“We have successfully established Lac des Iles Mine as one of Canada’s largest, lowest-cost and safest underground mines, producing a metal that contributes to a cleaner global environment.

“Our employees, suppliers, customers and community stakeholders can all join me in feeling tremendous pride at this pivotal moment in our company’s history. By becoming a significant part of a larger, integrated global producer, we will benefit from greater access to technical, operational and financial resources with which to pursue our production, development and exploration objectives in Canada.”

Under the terms of the deal, the acquisition will need at least 66 2/3 per cent of the votes cast by the NAP shareholders at an upcoming special meeting.