Harte Gold strikes it rich with mine financing deal 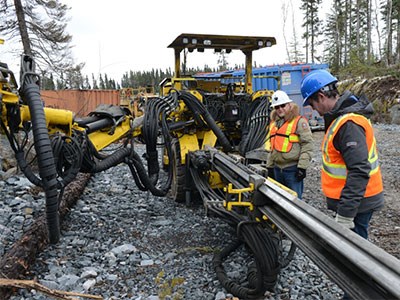 Harte Gold has struck a US$70-million debt financing deal to fund the construction of its underground gold mine, 25 kilometres north of White River.

The Toronto-headquartered gold miner announced May 3 that it’s reached an agreement with Sprott Private Resource Lending L.P. and Appian Natural Resources on a package to develop its Sugar Zone Project.

On the same day, Harte released a preliminary economic assessment (PEA) of its Sugar Zone Mine, projecting a 12-year mine life, starting in July, to be brought into production in phases as new deposits are tapped into on the company’s sprawling 80,000-hectare property.

The deal with Sprott is expected to close on May 31 with $20 million being immediately available on that date.

The rest will come in tranches in $10 million monthly drawdowns, as required.

The loan agreement with Appian closes on May 11 with $20 million available up front.

"Over the past six months, the company has conducted an extensive review of its debt financing alternatives,” said Harte Gold president Stephen Roman.

“We are very pleased to have reached an agreement with both Sprott and Appian on a financing solution which provides immediate liquidity for continued development while maintaining maximum flexibility and a lower cost of capital, compared to most project debt transactions executed the past few years.

"Most importantly, the financing announced today represents a fully funded solution with enough liquidity to support ramp-up of our operations and cover any unforeseen downturn in commodity prices, without having to approach the equity markets or any other financing dilutive to shareholders.”

The PEA projects the average yearly gold production at the mine to be 80,700 ounces with all-in sustaining costs of US$708.

The mine will be developed in phases beginning with its Sugar Zone deposit before extending to its Middle Zone deposit. There's another deposit, the Wolf Zone, just to the northwest.

Harte Gold reported that C$58 million remains to be spent to complete construction on the remaining 20 per cent of its on-site processing plant, for underground development, and for general working capital.

“The PEA demonstrates an economically robust, low-cost operation with a scalable mine plan designed to match underground development,” added Roman.

“With a target of 1,400 tonnes per day producing over 100,000 ounces per year, Harte Gold will have the cash flow to continue property wide exploration and the ability to target high impact acquisition opportunities.”

Roman expects the gold grade and amount of ounces on the property to improve over time as they continue exploration.

“There are over 500,000 ounces of resource currently not included within the PEA mine plan. As we continue drilling, we expect the economics of the Sugar Zone Project should only improve.”