Goldcorp’s Borden Lake gold deposit will be all-electric mine through its use of battery-powered equipment.
0
Oct 14, 2016 2:43 PM By: Ian Ross 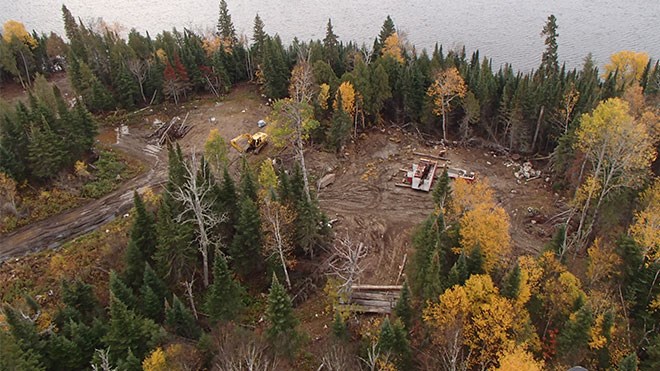 Situated on the shores of Borden Lake, Goldcorp’s next new mine will include a fleet of battery-powered equipment.

Goldcorp wants to take a low profile in developing an all-electric mine at its Borden Lake deposit.

The Canadian gold miner is determined to make its physical presence less felt with the first mine out of the chute in the Chapleau area’s emerging gold camp.
Situated 10 kilometres east of the town, Goldcorp’s 2015 acquisition of the project from Probe Mines was touted as one of the best new development assets in the industry.

Since mining is relatively new to this part of northeastern Ontario, Marc Lauzier, mine general manager at Porcupine Gold Mines (PGM) in Timmins, said his team is taking extra care to educate everyone and gather residents’ feedback in developing a “green mine” that will have minimal environmental impact.

“Borden is a bit unique,” he explained. “It’s a new mine and it’s in a pristine area. So we’re trying to minimize noise, dust and take the smallest possible footprint. Everything we’re doing revolves around that. If we do a good job, (people) actually see very little.”

In 2015, Goldcorp reported Borden Lake contained an indicated resource of 1.6 million ounces of gold. Exploration continues as the deposit remains open at depth.

Planned as a ramp-access mine, construction of the portal will start in February. The ramp will be driven into the deposit towards extracting a 30,000-tonne bulk sample in 2018. The sample will confirm the mine’s metallurgical and geological continuity. Commercial production starts in mid-2019.

While the study work goes on, Goldcorp will be applying for provincial and federal permits for commercial operations, said Lauzier.

“Right now, we’re permitted for advanced exploration and when that’s complete we hope that the timing will be such that we’ll get our permanent permits and we’ll continue on.”

The concept of all-electric mine had suppliers like Sandvik Mining and MacLean Engineering crowing of their involvement with the “world’s first 100 per cent diesel-free hard rock mine” at the MINExpo International convention in Las Vegas in September.

“We’ll be the first to try this jumbo, as far as I know,” said Lauzier. “Some of this gear has already been tested at other sites. Sandvik is providing us with the majority of the gear and there’s some utility equipment that we’re purchasing from other companies.”

Goldcorp has experimented with battery-powered vehicles at its other mines to eventually replace its diesel fleet as underground mine ventilation is being pushed to its capacity at these sites.

“What’s different about Borden is that we’re ordering all-electric and battery gear with the goal of using no diesel equipment,” said Lauzier.

Buying electric equipment means more upfront capital costs, but the payoff is down the road on operating costs and efficiencies by not burning fuel, and with the savings on ventilation and power.

“It’s cheaper to charge a battery than it is to run a fan,” said Lauzier.

Those savings will be identified in the more detailed mine feasibility study.

The possibility of generating their own power is “absolutely” being explored to reduce their reliance on the provincial power grid, he said.

The addition of a new mine into Goldcorp’s stable stands to benefit the longevity of its Timmins mines and mill operations, 160 kilometres to the northeast.

“It’s a great opportunity for PGM,” said Lauzier. “The mine here has been around for 110 years. I’ve got a very hungry mill that can mill up 12,000 tonnes per day and because of its size, the cost of milling here is very cheap.

“It makes trucking the ore to Timmins and milling it here economic rather than having to build a mill there and incurring that capital cost.

“There are lot of shared services we can provide between the two sites. If we were to find a lot more ore, there would be a point where it would trade-off and it would make a lot more sense to build a mill there. We certainly don’t have enough ore proven up to justify those expenses.”

Besides meeting with the Township of Chapleau, Goldcorp has been consulting with the Chapleau Cree, Chapleau Ojibway and Brunswick House with whom they’ve struck memorandum of understanding agreements (MOU). They are currently in the process of negotiating an MOU with the Michipicoten First Nation.