It was sitting in the camp kitchen after a shift at Detour Lake Mine that Paul Ross noticed the different T-shirts his colleagues were sporting. Adorned with the names of mining companies, unions and projects, one theme was missing: the equipment.
Feb 20, 2013 8:15 PM By: Lindsay Kelly 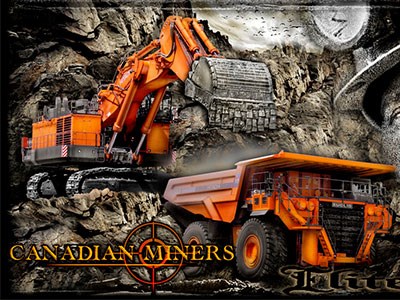 Paul Ross has designed a series of mining-themed T-shirts, with proceeds from sales going to the SickKids Foundation, an arm of the Hospital for Sick Children in Toronto that supports research into pediatric illnesses. He was inspired to give back after his daughter’s life was saved at the hospital 22 years ago.

It was sitting in the camp kitchen after a shift at Detour Lake Mine that Paul Ross noticed the different T-shirts his colleagues were sporting. Adorned with the names of mining companies, unions and projects, one theme was missing: the equipment. And that’s when he came up with his fundraising idea.

“Everyone is wearing T-shirts that say the company they work for, the union, the last project they worked at, but no one’s shirt shows what the miners actually do, the equipment we work with—$7-million haul trucks, $25-million shovels,” Ross said. “Most people don’t get to see this and the dedication and training it takes to operate such equipment.”

So, Ross, who was working as a foreman with Chartrand Equipment in Timmins before being laid off in December, designed a T-shirt depicting the mining equipment, with proceeds from sales of the T-shirts going to the SickKids Foundation, an arm of the Hospital for Sick Children in Toronto that supports research into pediatric illnesses.

The response from his fellow workers was immediate. On his first night on the job after relocating from Toronto, Ross got unanimous support from his new colleagues, who snapped up 200 T-shirts in just a few days after hearing his story.

“What a boost of confidence and a feeling of gratification I had at that point,” Ross said. “I can now say I have the friendship and the support of my fellow miners, and these miners are the best of the best, bar none. I knew by their support I was on the right track.”

This mission is a very personal one for Ross, whose daughter Amanda was diagnosed with epiglottitis—a rare, life-threatening viral infection that blocks a person’s trachea, preventing breathing—22 years ago at the age of 18 months.

Rushed to SickKids for emergency treatment, Amanda was released, healthy, several weeks later, and Ross said her life was spared thanks to the skilled doctors, nurses and staff who worked so quickly to save her.

The T-shirt fundraiser is his way of showing his enduring gratitude.

“I thought, what a great opportunity to give something back to a cause that, for so many years, I believed in but could never figure out a way to give back to,” Ross said. “I finally found a way to show my appreciation.”

After receiving the blessing of SickKids Foundation, Ross committed to raising $25,000 in T-shirt sales by June 26. To facilitate his campaign, he’s started a new company, Zee Best T-Shirts, set up a website and restructured the pricing.

He’s created additional designs geared towards first responders like firefighters and EMS personnel, and has also just released a mining-themed hat emblazoned with the phrase, ‘We’re dig’n up support for Sick Children’s Hospital.’

Currently in the process of securing distributors and retail stores willing to stock his products, Ross will make an appearance at the Timmins Mining Expo at the end of May; trade shows are one market he’d like to capture. The shirts make great incentive gifts or company rewards, Ross noted, and they can be personalized with the name of any mine, company or supplier.

He’s now designing an underground mining-themed shirt after getting some good-natured ribbing about his open-pit concept from visitors to his website, who gently reminded him that underground operations represent the majority in Northern Ontario.

“‘Get with the program, we’re all underground,’ he chuckled, recalling their response. “I said, ‘Okay, I worked in open pit. What do I know? I just moved here.’”