Poor mining practices were to blame for fall of rock that killed Marc Methé and Norm Bisaillon
0
Oct 5, 2019 7:47 AM By: Arron Pickard 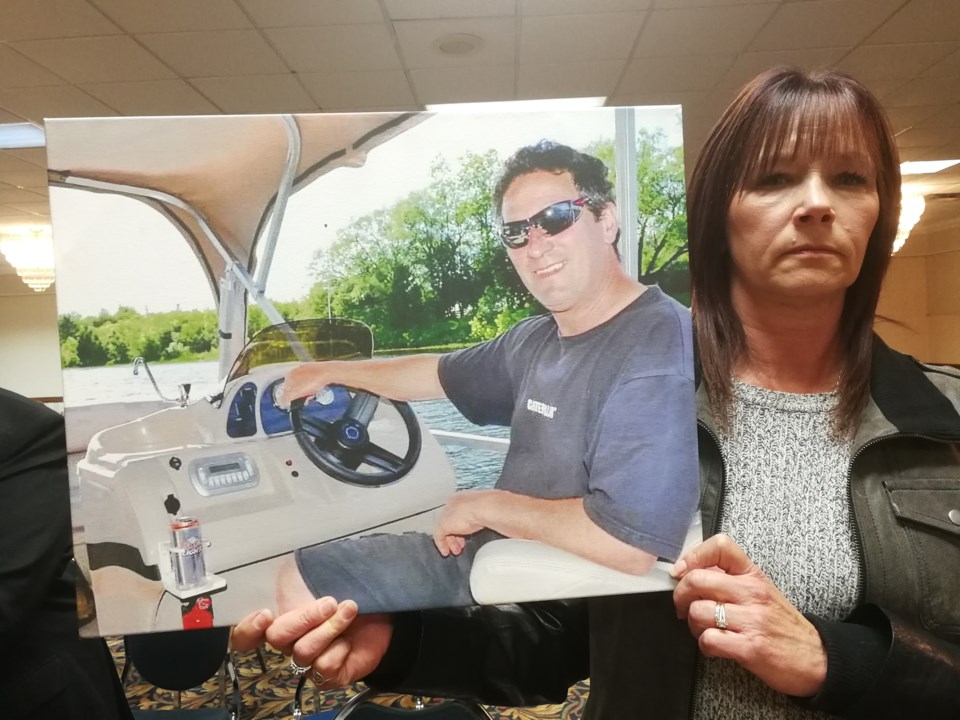 Romeena Kozoriz holds a photo of her partner, Norm Bisaillon, following the conclusion of a five-day inquest into his death. (Arron Pickard/Sudbury.com)

Norm Bisaillon's widow said she can finally start to heal following the conclusion of the inquest into his death in 2014.

Bisaillon and March Methé were killed June 6, 2014, by a fall of material as they were working on the mine's 6,500-foot level. They worked for contractor Taurus Drilling Services, and were two of eight Taurus employees working there that spring.

Romeena Kozoriz and Bisaillon had shared a life together for 25 years before he died.

“The trial was hard, but this was harder,” she told media on Friday. “We take it one day at a time, and we have our good days and our bad days. Five and a half years is a long time, and you don't start to heal until it's completely finished.

"Hopefully, from this day forward, our lives will be a little bit better and we can move forward.”

A five-member jury spent about two and a half hours devising a list of seven recommendations aimed at the Ministry of Training, Colleges and Universities, the Ministry of Labour, the province, and the Ministry of Northern Development and Mines. In testimony this week, a Ministry of Labour lawyer blamed the deaths on poor mining practices at the mine that led to the unsafe working conditions that preceded the Methé's and Bisaillon's deaths.

Kozoriz said she thinks the recommendations can prevent deaths like this from happening again, if they are all implemented.

“These are very important recommendations, and I really think the people on the panel will do what they can to make them happen,” she said. “This is our last chance.”

Dave Stewart, the Health and Safety Co-ordinator for Mine Mill 598 Unifor and a representative for the families, said he and his members will work diligently to make sure the recommendations are brought forward and that they have meaning.

“When we talk about ground control, about shotcrete installation, and quality control, these are all issues underground that we have to make safe for anyone working there, because it's imperative to everyone's safety,” he said.

“I, personally, have a great concern about what the next decade is going to look like. We're going to be going deeper in the mines, there are going be even more ground control issues, and we have to work together to develop good, solid programs and keep everyone safe.”

Both Bisaillon and Methé were working for Taurus Drilling Services at the time of their deaths. Company owner Roger Breau attended every day of the inquest. Taurus Drilling's assets were sold five years ago, and it now operates as a numbered company.

“It's important for us to memorialize these gentlemen, because we don't want what happened to them to be forgotten,” Breau said. “As owner of the company at the time, it was my role to take responsibility for our employees. I absolutely wanted to see this through right to the end.

“I didn't know Marc very well, but Norm was a good friend. I'd known him a long time, and we'd worked together all over the world. It's a great loss, and there's no way I would not be here for this.”

A scholarship has been established in honour of Bisaillon and Methé at Cambrian College. It is given to a student in the Mining Technology program who shows interest in ground control.

Breau donated $50,000 to the scholarship, and both families are tasked with choosing a recipient every year.

“If one of the people who receive this scholarship can make a difference down the road, that's what it's all about,” Breau said.

As for the recommendations put forth by the jury, Breau said a lot of strides have been made through the Mining Legislative Review Committee, and it's “good to see there's continuous progress in ensuring the safety” of people working in the mines.

Meanwhile, Stewart said the case isn't over yet.

“There are issues that can't be dealt with here,” such as the fact First Nickel went bankrupt, he said.

“The Bankruptcy Act needs to be reconsidered,” Steward said. “From the trial right through to the end of the inquest, there was absolutely zero participation from the owners of First Nickel. You can't imagine how hard it is for the family not to have that accountability from the employer. You shouldn't be able to go bankrupt and just walk away. I can't even put my anger into words.”

First Nickel went bankrupt in August 2015. The company was fined $1.3 million under the Occupational Health and Safety Act for the deaths of Bisaillon and Methé.

Throughout the course of both the trial and the inquest, it was revealed Lockerby Mine was a dangerous place to work, as testified by several former employees.

3. Recommendation to the Ministry of Labour: The Mining Legislative Review Committee (MLRC) must recommend to the Ministry of Labour that they develop legislation with respect to re-entry protocol after a recorded seismic event in an underground mine. The legislation should include ensuring the appropriate microseismic monitoring system exists in areas where individuals are located. The results of microseismic monitoring system must be made visible and the re-entry protocol displayed prominently.

4. Recommendation to the Province of Ontario, specifically the Ministry of Northern Development and Mines: The closure plan must include data collected pursuant to s. 72 of the Mines and Mining Plants R.R.O. 1990, Reg 854.

7. Recommendation to the Ministry of Labour: Mining companies in Ontario be required to ensure proper communication of the existence of any potential or actual danger to the health and safety of contract workers on their property. In particular, maintain a consolidated log book of pertinent information recorded and read by all contractors as well as mine employees, that would facilitate communication of information within the workplace.

Nickel drilling campaign turns up PGMs
Apr 7, 2020 9:14 AM
Comments
We welcome your feedback and encourage you to share your thoughts on this story. We ask that you be respectful of others and their points of view, refrain from personal attacks and stay on topic. To learn about our commenting policies and how we moderate, please read our Community Guidelines.