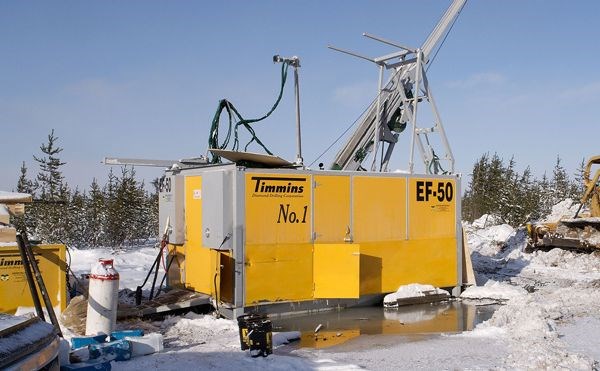 Explor Resources has started a drilling program on its Kidd Township property near Timmins.

A Toronto nickel explorer is making an entry into the Timmins gold camp through a merger agreement.

Explor Resources is merging with Pure Nickel on a 54/46 (Explor/Pure Nickel) basis.

Mining financier Eric Sprott is supporting the amalgamation with a $3-million investment.

R. David Russell of Pure Nickel will be CEO and president of this new combined company. Chris Dupont of Explor becomes vice-president and COO.

The merger is built around advancing Explor's Timmins Porcupine West Gold Property (TPW), which both companies believe has the potential to be an open-pit mine in the near future. A mineral estimate was posted in 2013.

The 3,550-hectare TPW Property is 13 kilometres west of Timmins and has Highway 101 running through it. It's next to Tahoe's West Timmins Mine.

Pure Nickel has properties in northern Manitoba and Idaho.

"Merging with Explor is the second major step in transforming Pure Nickel from nickel focused exploration to an advanced stage gold exploration and development company," said Russell in a statement.

"We believe the TPW gold property has the potential to be a flagship gold operation for the new company within a two- to four-year timeframe."

Dupont said this amalgamation is in the best interests of the company.

"The resulting company will work on advancing its gold projects to production such as the Timmins Porcupine Gold Project and Pure Nickel’s Neal Gold Project.”

There are exploration plans to do infill drilling within the proposed pit as well as step-out drilling to the east and west. Once that's done, a preliminary economic assessment will be done.

Under the terms of the deal, Pure Nickel will issue approximately 95,198,612 common shares in exchange for all of the issued and outstanding common shares of Explor, giving Explor shareholders voting control.