Sudbury’s Dynamic Earth mining science museum will be the test bed for a new large-scale underground air compressor to supply deep mines with cool air. The compressor will use an efficient hydraulic system to move air underground.
Jan 14, 2015 7:43 PM By: Jonathan Migneault 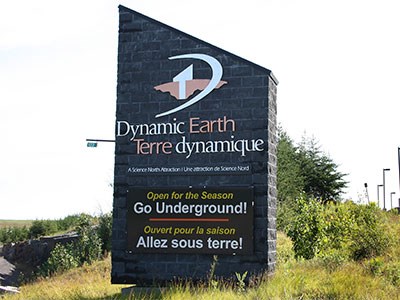 A large-scale hydraulic air compressor, which is scheduled to be installed at Dynamic Earth in the summer, should make ventilation for ultra-deep mines more affordable.

Sudbury’s Dynamic Earth mining science museum will be the test bed for a new large-scale underground air compressor to supply deep mines with cool air.
The compressor will use an efficient hydraulic system to move air underground.

A centrifugal compressor uses rotating impeller blades, similar to the propeller on a plane, to push air underground.

Reciprocating compressors use pistons to achieve the same thing.

“The hydraulic air compressor works in a completely different way,” said Dean Millar, a Laurentian University mine engineering professor and the project lead through the Mining Innovation, Rehabilitation and Applied Research Corporation (MIRARCO).

“You pressurize the water, and in turn the pressure is transmitted onto millions of little air bubbles which are mixed with the water,” he said.

The air from those millions of bubbles is pumped underground to supply workers with breathable oxygen.

The largest was in Cobalt, and at its peak provided 30 silver mines with fresh air. The compressor could provide mines with 22,000 cubic feet of air per minute.
“It's a colossal amount,” Millar said.

When completed – in August, if all goes to plan – the new hydraulic compressor at Dynamic Earth will provide only 350 cubic feet of air per minute.

But the demonstration unit – as Millar calls it – will have an important trick up its sleeve that does not exist in older models.

“The technical twist, which makes it very exciting, is that as well as transmitting pressure to the air, the water simultaneously cools the air down as it's compressed,” said Millar.

After labour, ventilation and cooling are the largest costs mines face. Those costs grow as mining companies chase mineralization deeper underground.
As Vale and Glencore contemplate descending to ultra-deep depths in some of their Sudbury mines – past 2.5 kilometres or around 8,000 feet – they will need efficient technologies to reduce those costs.

Millar said hydraulic systems are the most efficient air compressors. MIRARCO has teamed up with the Centre for Excellence in Mining Innovation's Ultra-Deep Mining Network to build its demonstration model so it can meet the needs of Sudbury miners.

“This has been designed specifically to address some of those issues,” he said, referring to the challenges mines face at depths past 2.5 kilometres.

In January 2014, Samantha Espley, Vale’s general manager of mines and mills technical services for its Ontario operations, said the company wants to reach three kilometres in depth, or nearly 10,000 feet, at Sudbury's Creighton Mine within the next decade.

Creighton is currently under its Phase 3 expansion, which includes the extension of the primary access ramp from 7,940 feet to 8,200 feet and the creation of three main production levels to access additional ore bodies.

Millar and his team have completed the project's conceptual design, and are now reaching out to local suppliers to help build the compressor – which will be installed in an old elevator shaft and will measure around 30 metres in height.

In addition to testing the compressors cooling function, Millar said he wants the project to prove local suppliers would be able to build production units at a large scale if needed.

The compressors location at Dynamic Earth – where it will be viewable by the public – is also important, Millar said.

“I certainly believe it's going to be a fantastic way to inspire another generation of engineers,” he said. “It draws upon a great many different disciplines all at once. From that point of view it presents an opportunity for a very valuable learning experience about engineering science.”

Dynamic Earth visitors will be able to see parts of the large-scale compressor from viewing platforms, and Millar said the science centre might add information about hydraulic compression to its main exhibit.