Exploration boom in the northwest continues for precious, industrial and 'green' metals
May 14, 2021 11:00 AM By: Northern Ontario Business Staff 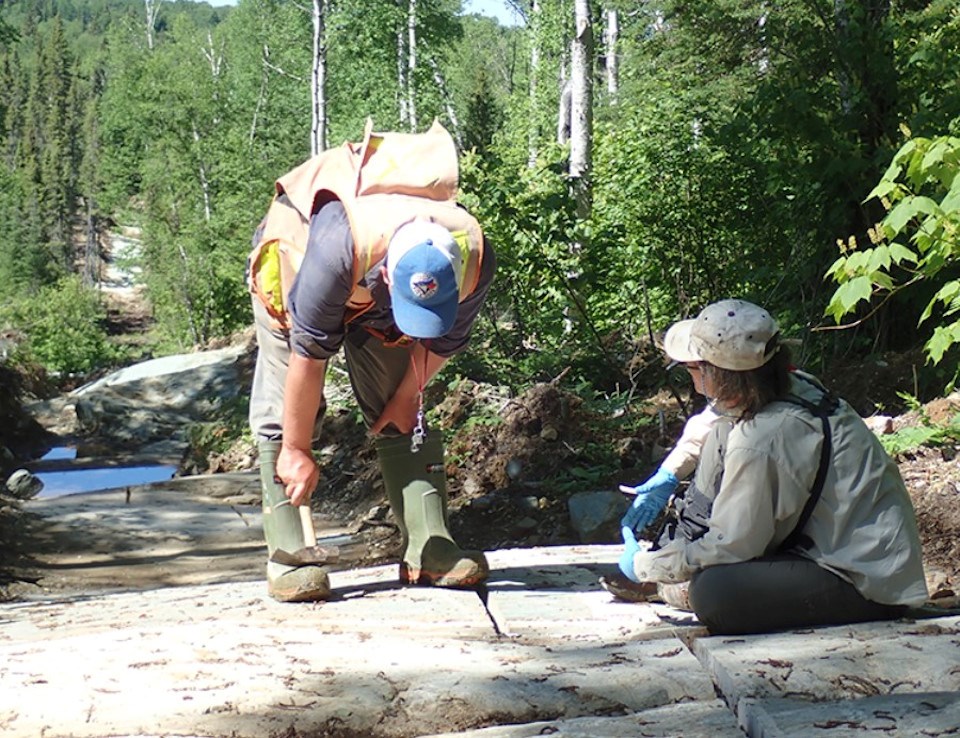 Gold and palladium exploration continues to dominate activity along the north shore of Lake Superior.

A mix of junior miners are either securing an initial foothold in northwestern Ontario, drilling off deposits, or approaching environmental and regulatory milestones in advancing their projects toward production.

Sudbury's Manitou Gold is picking up the pace of exploration at its Goudreau Project, outside Dubreuilville.

Since raising $5 million in financing last month, the company boosted its drill program from 10,000 metres to 30,000 metres.

After an encouraging winter exploration campaign, Manitou said it's diving into a new drill program to test new targets in a part of its property called the Baltimore Deformation Zone. The company said these deformation zones are the key to discovering major gold deposits and showings in this region.

The company holds 350 square kilometres of land between Alamos' Island Gold Mine and Argonaut's Magino Mine construction project to the west and the former Renabie Mine to the east.

The company is also conducting followup drilling to test new targets at its Stover Zone, located within the Goudreau property.

“The expansion to the ongoing drill program will allow us to continue to unlock the exploration potential along the western 10 kilometres of the BDZ.”

Toronto's Hemlo Explorers is 6,300 metres deep into a 10,000-metre drilling program on its North Limb Project, 15 kilometres north of Hemlo Mine near Manitouwadge.

This spring, management is drilling off select targets at North Limb. They say it bears all the geological similarities to that of the Hemlo gold deposit, which has produced 22 million ounces of gold since 1985.

There's been historical exploration in the area, the company said, but North Limb hasn't been drilled since 1996.

The company said gold and multi-element assays have been returned for three of the 13 drill holes completed.

“While the gold numbers reported from the first holes have only been anomalous, we are encouraged by the progress of the current program and look forward to more results to be delivered in the coming weeks and months,” said Brian Howlett, Hemlo Explorer president-CEO, in a news release.

Generation Mining, developers of a proposed open-pit palladium and copper mine outside of Marathon, is looking to add some longevity to their 13-year forecasted mine life.

Earlier this year, the Toronto company released a favourable feasibility study of the Marathon Palladium.

Recently, it released results of a 2,000-metre winter program, intended to find high-grade resources just west of the established outlines of the pit.

Generation kicks off a summer exploration program this month with 8,000 metres of drilling queued up.

It's been a busy winter and spring for the company.

An agreement in principle was reached with Biigtigong Nishnaabeg that sets the stage for a community benefit agreement down the road that will bring training, jobs, business opportunities and financial participation for the First Nation.

Their environmental impact statement – outlining the mine design and all its various environmental and socioeconomic components – was filed with a specially appointed federal and provincial joint panel review committee. The panel will be taking public comments until June 27. After that, their environmental assessment report is off to Ottawa and Queen's Park for final approval.

A company decision on whether to greenlight the project toward commercial production is being delayed until June 22. Generation Mining holds an 80.7 per cent ownership in the Marathon project through a joint venture arrangement with global palladium producer Sibanye-Stillwater. The latter company still has an option to increase its ownership in the property, which could impact a production decision.

Vancouver's Gold’n Futures is doing some exploratory prep work before mounting a drilling program this year in the Beardmore-Geraldton gold camp.

Their Hercules project is 40 kilometres east of Greenstone Gold Mines' Hardrock deposit at  Geraldton. Gold' n Futures signed an option agreement with Argonaut Gold last fall to acquire 90 per cent of the property.

A portion of the property had been heavily explored in the past for nickel and copper but a historic resource of 111,450 ounces of indicated gold was published in 2010.

They're building a geological model of Hercules, highlighting the known gold zones, with the help of a vast database obtained of all the previous exploration work done by companies over the years.

Gold'n Futures expects to start a sampling program this summer to set the table for the drill rigs to come in for a 10,000-metre program.

The company reported May 10 that it has staked additional claims next to the northeast, bringing their total land package to more than 10,000 hectares.

"These claims protect a potentially important area of geological structures and gold anomalies that may host another suite of high-grade gold occurrences,” said company president-CEO Stephen Wilkinson in a news release.

The company has a 45,000-metre drill program underway at its two deposits –Current Lake and Escape Lake – along with some regional exploration, but is also doing field data gathering for an upcoming environmental impact assessment of its Thunder Bay North Project.

A preliminary economic assessment for a mine at Current Lake is underway. The company is considering a ramp-accessed underground mine to reach selective, high-grade zones near the surface.

The company is also working on archaeological studies on the 30,000-hectare property under the supervision of their partnering First Nation communities. It's a conduct of conduct Clean Air Metals agreed to last January.

Clean Air Metals also recently announced its made a $1.5 million payment to Panoramic Resources of Australia. The company acquired the Current Lake deposit from Panoramic last year for $9 million with $4.5 million being paid upfront.

Two more installment payments of $3 million each are scheduled for May 2022 and May 2023.