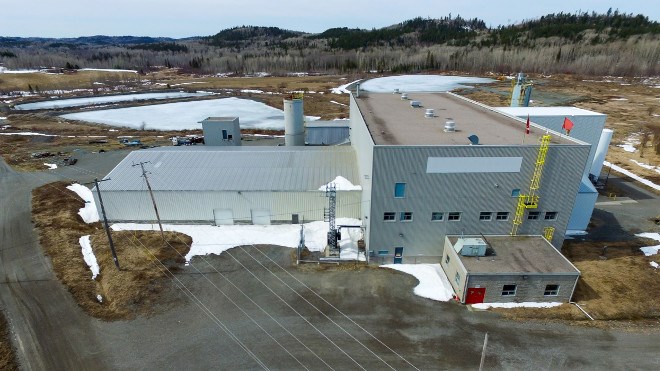 Securing outside feedstock is the key to a faster restart of a cobalt refinery in northeastern Ontario.

First Cobalt announced Oct. 10 that it’s in discussions with “several parties” to obtain an outside supply of feedstock that could help finance the restart of its mill near the town of Cobalt.

The Toronto junior miner is evaluating all aspects of how soon to reopen the shuttered operation it purchased in 2017, and position it as a toll milling facility.

How soon it reopens depends on the outcome of those talks with suppliers.

The company acquired the 22-year-old facility when it began assembling its sizeable land holdings of more than 11,700 hectares in the Cobalt camp, which includes 50 former silver mines containing cobalt material.

First Cobalt has not made a final decision, but the consultants who costed out the restart and operating estimates, examined the timelines for a permit review, and identified those feedstock opportunities, are giving all them positive encouragement, the company said in a news release.

“The facility is in excellent condition with permits in place and a short timeline to potential production, as well as optionality for both sources of material and refined product. Future off-take partners may offer flexibility with financing options to minimize dilution as we move forward.”

The facility, located five kilometres east of the Town of Cobalt, includes a refinery building and settling ponds on 40 acres. It’s permitted to expand up to 120 acres.

The mill is a three-circuit hydrometallurgical cobalt-silver-nickel refinery that was commissioned in 1996. Historically, it produced a cobalt carbonate, a nickel carbonate and silver doré.

Placed on care and maintenance in 2015, it is the only permitted refinery in North America capable of extracting cobalt to produce battery-grade material.

The company had been examining different restart scenarios and even an expansion of the refinery.

One consultant said under a base case operating scenario of processing 24 tonnes of material daily, a consultant said the capital cost to restart the refinery is US$25.7 million, including a 30 per cent contingency. The annual operating cost is $6.7 million.

A permitting review concluded that a restart is possible within 18 months.

Bringing First Cobalt’s own Ontario properties into production could be years away, so the company wanted to scan the marketplace to gauge their ability to acquire outside feed to get the facility up and running.

“In the short term, what we’re trying to do is find other feed sources so we can start the refinery sooner,” Mell said in an interview with Northern Ontario Business last July.

Part of First Cobalt’s strategy has been to determine where that feed was going to come from.

A consultant tells them there are opportunities at home and abroad with cobalt concentrate from other mines, from ethically-sourced cobalt hydroxide material from the Democratic Republic of the Congo, and recycled material, like spent batteries.

Last summer, Mell talked about the “uniqueness” of the facility, which has the physical and permitted space to expand, and can safely treat arsenic from cobalt-mineralized rock and render it inert.

Trying to replicate an operation like that under current permitting regimes, he said, “would take years, if ever.”

The replacement costs of the refinery range from $53 million to $143 million, depending on various throughput rates.

“There is an opportunity for us, not just to treat materials from discoveries that we’re chasing in the (Cobalt) camp itself, but also material anywhere in North America,” said Mell in July.

The company would also like to haul in feed from its Iron Creek cobalt project in Idaho, which Mell believes has mine potential.

The Ontario Northland rail line is a kilometre away from the refinery.

In the news release, Mell said since the U.S. does not product any meaningful cobalt production, that market is the “single best use” of the refinery to find off-take partners.

“At this time, we are working with engineering and market consultants to assess the suitability and margin opportunities of various feed sources. This process includes a review of design modifications to the existing refinery flow sheet and the resulting impact on capital and operating costs. While no decision for start-up has been made to move forward, we are reviewing funding alternatives that would minimize equity dilution for our shareholders today and in the future.”

First Mining closes streaming deal on northwest mine project
Jul 3, 2020 12:00 PM
Comments
We welcome your feedback and encourage you to share your thoughts. We ask that you be respectful of others and their points of view, refrain from personal attacks and stay on topic. To learn about our commenting policies and how we moderate, please read our Community Guidelines.