Agrium prepares to pack up in Kap

For more than a decade, Agrium's open-pit phosphate mine operation in Kapuskasing has been supplying high-quality phosphate rocks to the company's Redwater facility in Alberta. But come 2013, that will no longer be the case.
0
Jan 3, 2012 2:42 PM By: Patrick Demers 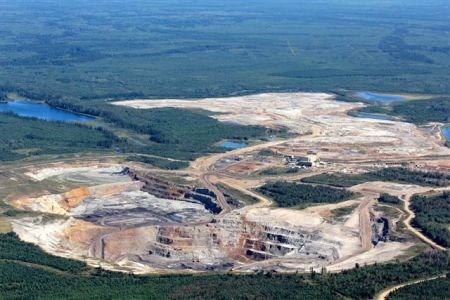 Agrium is winding down operations at its Kapuskasing phosphate mine, scheduled for a 2013 closure date.

For more than a decade, Agrium's open-pit phosphate mine operation in Kapuskasing has been supplying high-quality phosphate rocks to the company's Redwater facility in Alberta.

Calgary-based Agrium announced in September that it has executed a long-term rock supply agreement with Moroccan company OCP to purchase phosphate rock for its facility.

“We knew the economic life of the mine in Kapusasking was coming to a close in the future,” said Richard Downey, vice-president of investor and corporate relations at Agrium. “So we basically looked at rock suppliers around the world and talked to a number of them as to what would be the best solution.”

The move utilizing rock from OCP is expected to take place in the second half of 2013, when economic rock reserves from the Kapuskasing mine will be depleted.

“It's a rock supply agreement for the total means of the Redwater facility,” added Downey. “And the price of the rock will vary depending on international back prices or phosphate prices.”

The new agreement lasts until 2020.

“Every mine has an end of life and we were notified well in advance of this mine's state,” said Al Spacek, mayor of Kapuskasing. “They had actually projected fairly accurately when the mine was open what the operating life would be, and now it's approaching.”

Agrium is a major retail supplier of agricultural products in North and South America. It produces and markets three primary groups of nutrients: nitrogen, phosphate and potash, as well as controlled-release fertilizers and micronutrients.

Agrium developed the Kapuskasing mine in the late 1990s to replace phosphate rock which has previously been purchased from Togo in West Africa.

“We had an estimate (for the mine life expectancy) and I think that it served us well,” said Downey. “But that's the way mining goes sometimes.”

According to Agrium, the mine in Kapuskasing provided excellent return on investment over the past decade.

“They're a good corporate citizen,” said Spacek. “Their employees are also active in our community.

“A lot of them are from Kapuskasing, so certainly we value Agrium’s presence and participation in our community.”

But the company's presence will not immediately vanish overnight once the mine is depleted.

An open-pit mine causes environmental and land disturbances with reclamation plans developed from the beginning which have to be approved by governing agencies.

“There are some very large open pits there that will have to be filled back in,” said Spacek. “There's some substantial remediation that needs to take place as part of a mine closure process.”

Revegetating the backfill and access roads can complete the reclamation process, but several years of monitoring are needed before reclamation can be considered 100 per cent successful.

“So it can be a long time that they will have a presence here,” said Spacek.

In terms of job loss, Spacek said that normally the closure of the mine would have a substantial impact on the community, considering they are the second largest employer, providing 300 direct and indirect jobs.

But Kapuskasing has found itself in a unique position that will open the door for some viable options.

Detour Gold is set to commence its mine operation soon, and has already hosted a job fair in the community.

Spacek was able to speak to Detour Gold's CEO Gerald Panneton at the Prospectors and Developers Association Conference (PDAC) in March.

Spacek said he successfully set a meeting between both Detour Gold and Agrium to have a discussion about potentially transferring the workforce from one company to another.

“All I can say is that discussions took place,” said Spacek. “But I think what's changed is, unfortunately, the Detour Gold operation will be operating much sooner than they expected. What's happening is you can see people transitioning over there sooner.”

Spacek said that it's not necessarily good for Agrium, but in terms of a community perspective, it means that the people within the community are still going to be employed.

“Now we don't want Agrium's operation to close here any sooner than it has to, but they might have a bit of a challenge keeping their operation staffed.”

Another option for employment in Kapuskasing could be through Tembec's mill operations as well.

Spacek said he was told Tembec anticipates hiring 70 to 80 people per year for the next number of years.

“There's going to certainly be an adjustment, but we have some very viable options,” said Spacek.