A Sudbury-based green technology company is making inroads in the U.S. with the testing of their innovative solar devices in Arizona. Crystal Green Energy has been working on their Solar Optic Modules (SOMs) for five years now.
Apr 25, 2016 5:32 PM By: Ella Myers 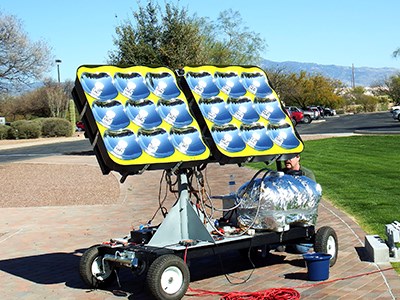 A Sudbury green tech company, Crystal Green Energy, is using the Arizona sky as a test bed for its Solar Optic Modules device.

A Sudbury-based green technology company is making inroads in the U.S. with the testing of their innovative solar devices in Arizona.

Crystal Green Energy has been working on their Solar Optic Modules (SOMs) for five years now. In February, they began testing at the Arizona Center for Innovation in Tucson.

“Testing in Arizona is the first step towards proof of concept,” said Gilles Leduc, company president and inventor. “It’s to make sure all of the individual components work.”

The SOMs are in Arizona to test how they function in extreme environments.

The devices have already seen some frigid Sudbury weather, but Leduc needed to see how they held up under the dry southern heat. There was also, quite simply, a shortage of sun in Northern Ontario.

The most obvious is its shape.

The SOMs consist of a beehive of several deep, highly reflective lightweight cones that more efficiently concentrates the sun’s rays.

While a traditional panel may operate at around 15 per cent efficiency, Leduc said his modules are closer to 40 per cent.

The device also takes into account the time, and includes a tracking system so it follows the sun through the sky as it moves, maximizing exposure.

Unlike a traditional panel, which is linked to one substrate, the module incorporates several cells onto one substrate, an innovation Leduc describes as “a leap forward, like taking a transistor to an IC.”

Energy that isn’t used immediately can be stored in a battery for later use, which Kelsey, Leduc’s daughter, an engineer in training at the company, said customers might find useful for offsetting peak pricing of regular hydro.

A byproduct of Leduc’s solar creation is a substantial amount of thermal heat. He and his team incorporated a thermal loop into the design, effectively turning it into a combined heat and power unit (CHP).

That heat could wind up being an efficient way for users to heat up their water.

Leduc said the goal is to have the SOMs on the market by the beginning of 2017. While it has residential, commercial and industrial potential, they anticipate the first users will be residential customers and small business owners.

“At this point, it’s the tech-savvy TV enthusiasts who will want it,” said Gilles. “My job right now is to bring it cost-effective compared to a flat panel.”