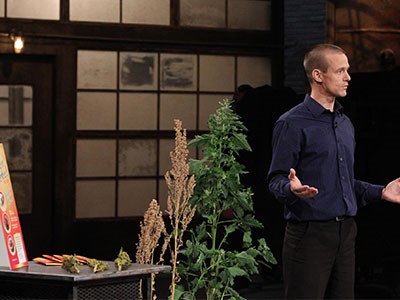 Jamie Draves made a successful pitch to investors on TV’s Dragons’ Den in March. Draves is working to establish a quinoa crop in Northern Ontario, with plans to build a processing facility in the Cochrane district.

Jamie Draves didn’t set out to become a quinoa producer. But after a health scare eight years ago, he’s become a believer in the nutritional benefits of the plant, and is now working to commercialize a growth and production operation in Northern Ontario through his company, Katan Kitchens.

In 2007, Draves was diagnosed with idiopathic pancreatitis — inflammation of the pancreas with no traceable cause — and traditional medicine proved unhelpful in diagnosing or healing his illness.

Consulting with a team of health-care professionals, he focused on developing a diet that would improve his digestion, immune system and overall health, putting “superfoods” like quinoa at the centre of his back-to-health strategy.

The plan worked; Draves preserved two thirds of his pancreas and has since regained his health.

“I continue to have to manage what I eat, and there are certain things, like alcohol, that I can never really have again,” Draves said. “But that list of what I can have continues to expand and, for the most part, I feel better than I have in a long, long time.”

Eager to share the healthful benefits of quinoa with others, Draves partnered with the Ontario Ministry of Agriculture, Food and Rural Affairs, and the Ontario Soil and Crop Improvement Association to test the viability of quinoa in Northern Ontario. More than 50 varieties have been tested since the first crop trials in 2011, and he’s now settled on a variety called “Quinta,” which he said has emerged as the “top candidate for commercialization.”

Because quinoa is difficult to cross-breed, the researchers selected for breeding the varieties that showed the most promise for successful cultivation in Northern Ontario conditions.

“The quinoa, even though it’s grown in South America, it’s grown in the mountains, so it prefers the hot days, cool nights, and that’s quite conducive to that Northern Ontario climate,” said Draves, who’s based out of Georgetown, located 60 km west of Toronto.

Draves favours the Northern Ontario growing region for personal reasons, too. Originating from Cochrane, his family retains close ties to the area, and “my heart is still in the North,” he said.

While participating in the 2014 Royal Agricultural Winter Fair in Toronto, Katan Kitchens caught the eye of a producer of the television series Dragons’ Den, who encouraged Draves to appear on the show. He was initially hesitant to participate, but after some back-and-forth with the Dragons, he negotiated an investment deal with celebrity chef Vikram Vij: $200,000 for 20 per cent of the company.

In the aftermath of the show, which aired on March 11, Draves, whose background is in consulting in the medical field, said he’s been overwhelmed by the positive feedback and support from the Northern Ontario community for his endeavour. Viewership peaked at around 1.2 million people during his segment on the show, and friends, acquaintances and new contacts have come forward praising his work.

It’s been a year since that deal was negotiated, and in that time Katan Kitchens has moved closer to commercialization.

“We do have some investors on board and we continue to have discussions,” Draves said. “The project has expanded quite a bit to include other crops and other dynamics to it, and we are at a point where we’ve applied for some government funding. If it comes through, we will start building the facility this summer.”

The manufacturing facility, which will span 6,000 to 8,000 square feet, will be built in the Cochrane district, and Draves anticipates hiring five to 10 people to start, with the workforce growing to 50 in five years.

The processing of additional crops is also part of the plan, which he said will help farmers get a fair price for their crops.

Draves anticipates the facility will produce some products starting this fall and moving into full operation, producing consistent product by 2016. He predicts annual revenue will be at $50 million in five years.

This Hearst-area mining solutions company has the answer to contain COVID-19
Nov 16, 2020 4:05 PM
Comments
We welcome your feedback and encourage you to share your thoughts. We ask that you be respectful of others and their points of view, refrain from personal attacks and stay on topic. To learn about our commenting policies and how we moderate, please read our Community Guidelines.