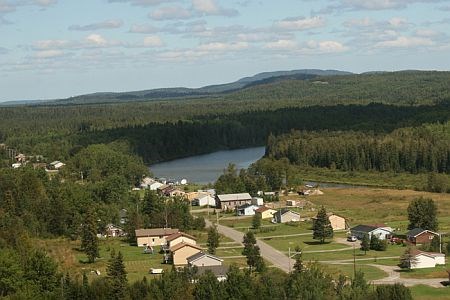 The community acquired full ownership in the five-megawatt hydro plant that has been generating power for the Ontario grid for eight years.

The community of 964 on and off-reserve residents has three hydroelectric generating stations in its stable with Umbata (25 megawatts) on the White River, system, Wawatay (13.5 megwatts) on the Black River and now Twin Falls on the Pic River system.

Pic River held a minority interest in Twin Falls, which had been set up as a limited partnership involving a dozen private partners from southern Ontario.

After a year and half of complicated negotiations, the deal was finally closed July 13. Terms were not disclosed.

“It's a $10 million project and we got it for something a little less than that,” said LeClair.

Commissioned in June 2001, the generating station was undergoing a maintenance audit this summer, but LeClair said it is mechanically very sound.

In a statement, Pic River Chief Art Fisher called the acquisition “an important stepping stone” to support further hydro development on their traditional waterways with two new projects on the drawing board.

The First Nation has been awarded the development rights on two sites on the Kagiano River, a tributary of the Pic River system, about 50 kilometres west of Manitouwadge.

The proposed High Falls and Manitou Falls are expected to be built and operating within five years, said LeClair, after a two-year environmental assessment process, one year of permitting and two years of construction.

Connecting to the Ontario grid shouldn't be a hassle. The community invested in new transmission infrastructure years before to take on additional capacity. “We don't expect inter-connection to be a problem,” said LeClair.

“This is how the development tree is supposed to progress. We started out as a small minority partner in Wawatay, to a minority owner in Twin Falls, to a majority owner in Umbata and now we're the total owner in these new projects.”

With the addition of Twin Falls, the community dividend is expected to be in the millions.

All of these stations are off-reserve but within their traditional territory. LeClair said it would be more complicated process to finance these projects if they were on the 800-acre reserve because of the unique federal land tenure system and with banks requiring security.

The Twin Falls acquisition was made with the support of the Royal Bank. “Without their help this wouldn't have been possible.”

Pic River is also involved in wind energy. One project is the proposed 100 megawatt Coldwell wind farm, northwest of Marathon, through a partnership with Brookfield Renewable Power. It passed environmental screening last fall.

Another wind proposal, Superior Shores, has completed a year's worth of meteorological site testing.

The First Nation is also partners with Pays Plat First Nation and Brookfield in developing a 10 megawatt project on the nearby Aguasabon River. An environmental assessment is being completed and the groundbreaking for construction is sometime next winter.

LeClair said finding construction trades will be a challenge. When Umbata Falls was built, labour came from Quebec. “If we need the expertise, we will find it.”

The community already enjoys a solid relationship with Marathon PGM, a Toronto exploration outfit with plans to develop a $385 million base metal-copper deposit near the town of Marathon.

LeClair said company president Phil Walford has lead the way in writing a joint framework agreement for future jobs and contracting opportunities that they use as a template in negotiating IBA's with other exploration companies.