There’s a change at the top of a Thunder Bay-based forestry innovation institute. Scott Wiebe is the new CEO of the Centre for Research and Innovation in the Bio-economy (CRIBE). He replaces Lorne Morrow who departs after a five-year term.
Jan 14, 2015 7:00 PM By: Ian Ross 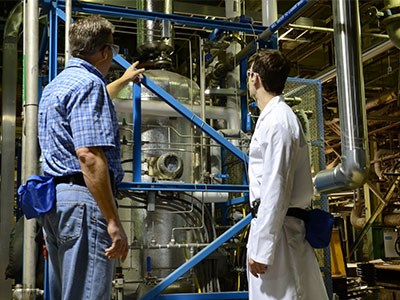 CRIBE has spearheaded research initiatives like the establishment of a lignin extraction plant at the Resolute Forest Products mill in Thunder Bay.

There’s a change at the top of a Thunder Bay-based forestry innovation institute.

Scott Wiebe is the new CEO of the Centre for Research and Innovation in the Bio-economy (CRIBE).

He replaces Lorne Morrow who departs after a five-year term.

Wiebe, who was previously CRIBE’s program manager, served a two-year stint as business analyst for AV Terrace Bay, a pulp mill operation in Terrace Bay owned by the Aditya Birla Group of India.

Wiebe said he brings back a greater appreciation for the “on-the-ground, real-world issues” surrounding wood supply, logistics and fibre costs in Ontario.

Though grateful for the experience and technical knowledge he gained while with Birla, “this job is very much about the people and the innovation in Ontario, and that’s exciting for me.”

CRIBE was established as a not-for-profit institute by the Ministry of Research and Innovation in 2008, a time when the forestry sector in northwestern Ontario was collapsing.

There were high expectations that CRIBE would be a catalyst for a new wave of sector growth by helping facilitate a pipeline of new value-added products such as green fuels, fibres, composites and chemicals using forestry biomass.

Armed with a $25-million investment fund, CRIBE doesn’t perform any research but coordinates activity between government, companies and post-secondary institutions.

CRIBE funds up to 50 per cent of a proposed value-added project to the pre-commercialization with either grants or loans. A proponent must provide 25 per cent in cash with the rest coming from either in-kind contributions or other funding corporations.

CRIBE boosted some successes — such as lignin extraction plant at the Resolute mill in Thunder Bay — but other initiatives have been slow to develop, given the tenuous state of the industry.

As Wiebe prepares a new organizational strategic plan for next year, he suggested there may be some tweaks toward applying a “new face” to CRIBE.

“We’re hoping to change the approach without changing the core mandate of what we are, which is innovation with wood fibre.”

“How we brand it and move forward may change, but the sense that this has to make a business case will always be there.”

The next evolution will surely involve greater involvement with international trade investment agencies to lure outside players to the region.

With sawmills on the rebound in the region, Wiebe said there’s an abundance of residual fibre that wasn’t available in 2008.
“The capacity is building up to a point where we can really do something.”

CRIBE also announced some reshuffling on the board of directors.

Stepping down as chairman is Frank Dottori, founder of Tembec and now the president of White River Forest Products. He remains as a board member.

Replacing him is Michael Willick, a forestry consultant, who was CRIBE’s first CEO when the organization was formed.

Departing from the board are Don Campbell and J.P. Gladu, who are leaving after six years and three years, respectively. Stepping in is Doug Murray, CEO of the Thunder Bay Community Economic Development Commission and a former Resolute Forest Products mill manager in Thunder Bay.

Want to have a say on the Marathon mine's EA?
Oct 9, 2020 3:30 PM
Comments
We welcome your feedback and encourage you to share your thoughts. We ask that you be respectful of others and their points of view, refrain from personal attacks and stay on topic. To learn about our commenting policies and how we moderate, please read our Community Guidelines.