What started as an association to create job opportunities for single mothers has flourished as a viable greenhouse operation.
0
Sep 6, 2011 3:54 PM By: Patrick Demers 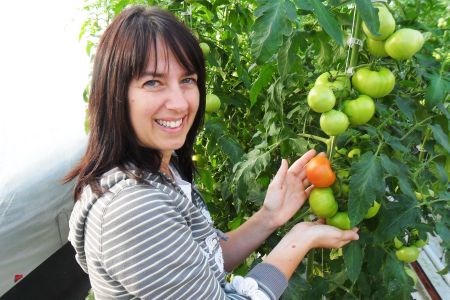 What started as an association to create job opportunities for single mothers has flourished as a viable greenhouse operation.

For 29 years, the Hearst-based La Maison Verte was run by manager Michelle Lamy, who has been with the project since its very beginning.

In early July, Lamy decided to retire and handed the reigns to Manon Cyr. But she didn't leave without saying a few encouraging words for her successor.

“I was quite honoured with the transition that was made,” explained Cyr. “Michelle said to me before she left that she could now leave without worry because she knows her baby will be taken care of.

“It was a very nice thing to say that I found amazing.”

La Maison Verte started in 1982 by l'Association Parmi-Elles, a women’s group with a mandate to create financial opportunities and promote well-being for women in the area.

At the time, the forest industry was run and occupied mostly by men, and women found it rather difficult to find employment in the field.

“They were looking to invest in a project with greenhouses, and together with private finances, they created what was the beginning of La Maison Verte,” said Cyr.

Seventy local investors established the greenhouse with some help from government funding.

The business currently has six full-time employees, and 20 occasional employees from May to June – most of them women.

“What’s nice about La Maison Verte is that it’s still everything about community growth,” said Cyr. “It’s still about women’s involvement and opportunities for them.”

The entire Hearst forest covers around 12,000 square kilometres with black spruce making up 67 per cent of the species.

As a not-for-profit, La Maison Verte has made its mark on the area economy.

It has produced close to nine million seedlings annually for clients including Hearst Forest Management, Nagagami SFL and Tembec.

“It has definitely been better these last few years,” said Cyr.

In the 1990s, the project added the production of flowers and tomato plants in order to diversify its business.

Since then, it has opened a flower and gift store and successfully created a garden which produces vegetables ranging from carrots to cauliflowers.

But because of the limited growth that is available, La Maison Verte could only produce up to 32 baskets.

“What we have left, if we do have anything, is in the store,” said Cyr.

Cyr explained that the only things left in the garden from the previous baskets were simply a few carrots.

“We’re definitely pulling from the garden,” she said.

What has finished growing in the garden is what will ultimately be put in the basket.

“So go to the grocery store after you receive your basket,” she said laughing.

Cyr said she would like to see the orders of baskets go up from 32 to 50, but in order to do so, they would need help from other local growers.

“It would almost double our production and at the same time, be another means of helping other producers that don’t have a market,” she said. “But 32 is good for what we have now.”

The baskets, made by Hearst's Industries LacWood, also arrives with recipes and nutritional facts.

“Our goal as well is to educate people,” said Cyr. “There are a lot of opportunities here with health units too.”

But even with the potential opportunities down the road, the upcoming 30th anniversary, and the progress of the newly-introduced vegetable basket, it’s easy to forget the fact that Cyr is simply a few weeks into her position with La Maison Verte, and that this is just the beginning.

Navigation app breaks down barriers for the visually impaired
Jan 7, 2020 11:00 AM

Ignace last remaining northern community in running for nuclear waste repository
Nov 26, 2019 2:00 PM
Comments
We welcome your feedback and encourage you to share your thoughts on this story. We ask that you be respectful of others and their points of view, refrain from personal attacks and stay on topic. To learn about our commenting policies and how we moderate, please read our Community Guidelines.