Property acquisition and demolition of buildings in Sault Ste. Marie begins this fall to make way for an expansion of the Canada Customs plaza at the International Bridge. The long-awaited project received a kick-start Sept.
Sep 4, 2009 7:27 PM By: Ian Ross 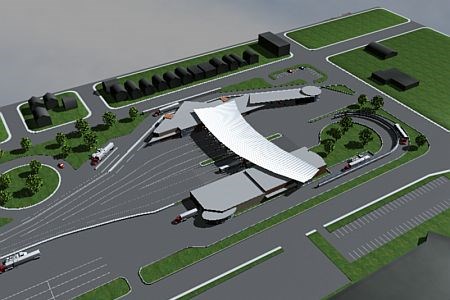 About $44 million in federal funds will go towards building the Canada Customs plaza at the International Bridge. (conceptual drawing)

Property acquisition and demolition of buildings in Sault Ste. Marie begins this fall to make way for an expansion of the Canada Customs plaza at the International Bridge.

The long-awaited project received a kick-start Sept. 2 when Prime Minister Stephen Harper and federal Transport Minister John Baird arrived in the Sault to deliver $44 million from the Gateway and Bordering Crossing infrastructure fund.

The money will be used to expand and re-design the plaza to provide the Canada Border Services Agency (CBSA) with a new two-story administration building and modern inspection facilities.

Bridge general manager Phil Becker said the investment is the largest capital improvement in the structure's history, considering the 4.5-kilometre span was built for $20 million when it opened in October 1962.

Aside from some minor additions and renovations over the years, the current customs plaza is the same as when it first opened.

“It's a good investment to fully develop the potential of this crossing for the trade and commerce between our two communities and our two nations,” said Becker.

Federal Bridge will be overseeing all aspects of the design and construction of the project through to the completion date on Mar. 31, 2014.

Overall, it is a $50-million project when property acquisition costs are factored in.

The federal funding only covers the plaza reconstruction. The estimated $6 million needed to buy adjoining land must come from bridge revenues taken through tolls.

So far, the Joint International Bridge Authority has spent $800,000 on properties acquisition. The other property owners are being contacted.

Becker said it's going to be a challenge in the face of continually declining car and truck traffic “but we can't miss this opportunity.”

Becker said traffic has dropped about 20 per cent this year. March saw a huge reduction in truck crossings, down 30 per cent from the same month in 2008.

A big portion of that drop-off is because of fewer steel shipments from Essar in Sault, Ont.

But in the long-run, the expansion could make money for the bridge. The international trade potential of the crossing could be boosted by reducing wait times at the border through the installation of modern processing and security equipment.

"The demolition of some homes begins this fall, as will some minor construction such as sewer re-routing."

Federal Bridge plans to launch a competitive bid process for a design team within the next few weeks to prepare the construction drawings this winter. A general contractor will not be in place until the fall of 2010.

“This all hinges on the properties, how quickly we can buy and how quickly everybody gets on board to sell.

“If everything goes well and there aren't too many changes to the client's requirements (CBSA), we could have a package ready in mid to late summer of next year” and go out to tender to obtain a general contractor.

During construction, customs administration will be moved into temporary facilities across Queen Street on a vacant lot which eventually will be acquired for a secondary inspection facility.

Transports leaving Ontario would come off of the Carmen's Way truck route into the bridge plaza. Trucks entering Ontario would be shuttled into a VACIS (Vehicle and Cargo Inspection System) inspection area where a scanning system would allow custom officials to see the contents of an enclosed vehicle or container.